When I moved into the new house, I found the kitchen and the freezer still containing all sorts of foodstuffs. I chucked away whatever looked iffy (opened jars), kept what would last forever, and gave the content of the freezer to Jenny, who in turn gave it to her pig Smot. Smot seems to be very happy with the situation!

Some of the stuff that lasted forever was maize-based; it turned out Rose had been gluten intolerant. But what to do with maize meal? I decided to one night treat it like instant potato mash. It was acceptable, but not something I would buy maize meal for myself. Then I tried to make maize flatbread. I mixed the maize with oil, salt and some spices, and kneaded it. It was very crumbly and (as Google had recommended) I added some wheat flour to make it stick better. I then made it into a flatbread shape and plonked it in the frying pan.

The result, again, was acceptable, but not something I would buy maize meal for myself. But the bag is getting emptier! I say one or two more of these experiments and I've finished it. And then I have a bag of polenta to deal with! I assume it's not particularly different...

I was hoping I would find some way of using that would be really nice! But that might still happen... 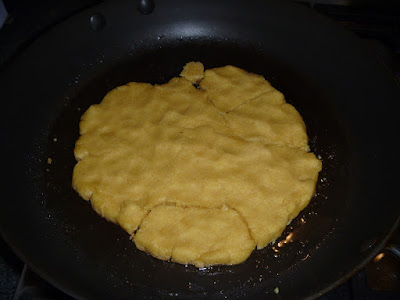 My attempt at maize flatbread
Posted by Margot at 09:23