I hadn't been climbing much recently! One night I had an appointment with the plumber, and one day I had some work stuff going on late and it would have been a right hurry to make it. So it had been three weeks! But I could make it out again. We would go to Gwern Gof Isaf. I had been there before, in August 2016, but that never made it to the blog. It was a hot day in Menai Bridge, so I expected sunburn and midges, but when I got to the campsite it was very windy. Soon I was wearing long trousers and a jacket! Who would have thought. And no midge was to be seen. 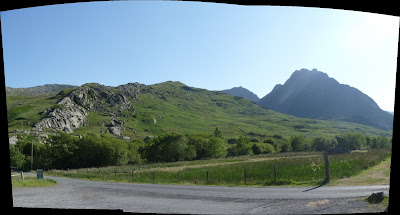 The crag with Tryfan in the background

Tony (who we hadn't seen for a while) and Eifion rigged two pitches. When the first was ready, Janet tried to climb it. It wasn't easy! I think it was 'Bulge'. Then the second was ready and I tried that; that was more doable. Not sure what this one was; Canol? Llech? 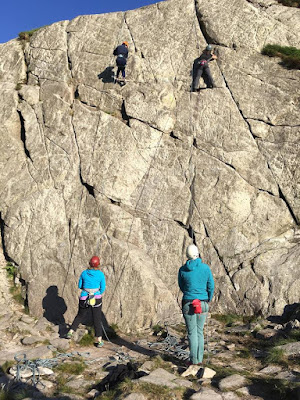 Janet (left) and me trying the routes. Pic by Eifion

Eirian and Charlotte tried it too but weren't feeling it. They weren't all that keen on the Bulge either. So while the men were trad climbing around the corner, Janet and I swapped routes. Then the men reappeared.

They didn't like how the rope caught on the easier of the routes; it gets stuck in the crack. They both just did the Bulge while I de-rigged the other route. Then I could take all out! It hadn't been a long climbing night, and I had only done two routes, but the company was good, the weather lovely, and no midge to be seen. No complaints! 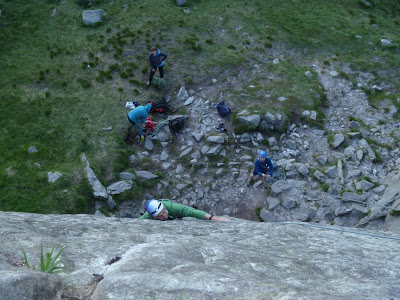 Eifion on the Bulge 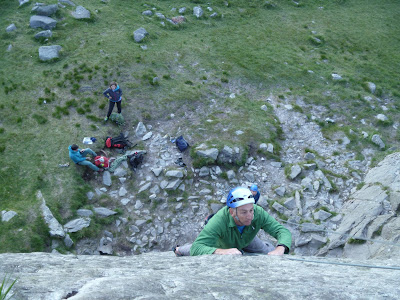