Information under the wallpaper

When you pull off wallpaper you might find things! So far I hadn't, but when I started in the landing I found two notes. One, I think, says 'John & Glynis 2/1/77 - 4/1/77 + Simon'. I admit the scribbles don't clearly say 'John' but the neighbour had already mentioned that before Rose, there was a couple called John & Glynis living in the house, and the writing did seem to clearly say 'Glynis'. One fills in. And when he saw the graffiti he mentioned they had a son called Simon. I'm not sure what exactly they were doing that involved writing on the wall, but it's nice it's still there! Another note seems to say 'plastering today 27 July 79'. That is not written on the plastering! But on some white stuff on top. I can't make total sense of it, but the neighbour confirmed it had been about 1977 that they had had the extension built, and that it may have taken them two years to finish the decorating. I'll try to keep the writing there! Although covered by paint. And I may add my own! 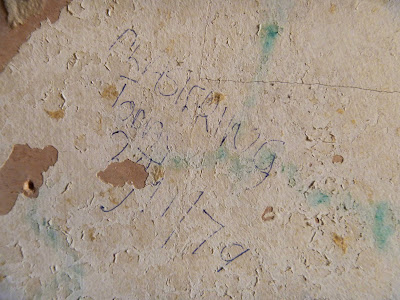 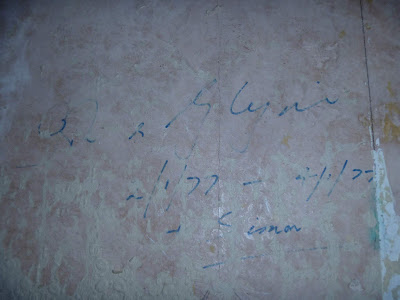