Originally, I would travel up with the geophysicists on the Wednesday, then do my foram work on Thursday and Friday, then do core descriptions on the Saturday, and travel back on Sunday. Things went differently! Dei, the one geophysicist, had an interview for a position in the College of Natural Science on the Thursday. He would have to drive back for it! So he couldn't do his thing that day, and asked if we could swap. We could! I could do Wednesday and Friday. With my reduced assignment, I could fit it on a day that would start after the drive up. So I did! And then I thought I would have the Thursday off. Not so much! That day the students would survey a lot of transects across the estuary. They do that every year, so they can see if anything changes, and if yes, then what. Quite cool! But Suzie, who organises the whole field trip, wanted me to join the surveying. If I would, I would be able to supervise the surveying the year after. I needed to know what they did and how they did it! The last time I surveyed with that sort of equipment was eight years ago. One forgets!

I would join Suzie and her students, Charlie and Freddie, on what was known as line 4. We walked to the start of the line and started the survey. Suzie showed the students (and me). We we on the salt marsh; it was on the eroding side of the estuary, so it ended in a steep cliff. From the bottom of the cliff to the channel was steep, short and muddy. The channel looked big, deep, and fast! Oh dear.

We did a measurement on the channel edge and then it was time to try and cross. Suzie and Freddie would cross, and Charlie would take a measurement of the elevation on the other bank, and then we would cross too. So the two got into the channel. It got deep quickly! And then Freddie slipped and fell over, and was immediately swept away. Oh dear! He swam back to shore, and Suzie decided we should see if we could cross somewhere else. Freddie checked the contents of his bag (no damage worth mentioning) while Suzie slopped upstream through the mud. 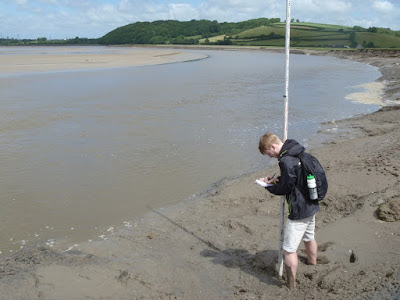 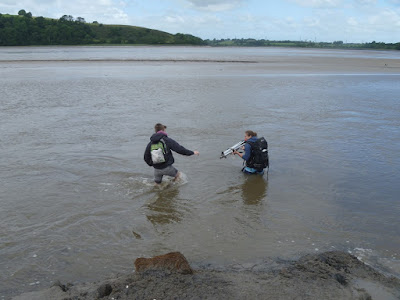 Starting to cross the channel


She came back. It was as bad elsewhere! We would have to wait for the tide to go even further out. But I was scheduled to come out of the field early; a student had to go to the railway station, and I was the designated driver. Suzie figured maybe I should bring the girl a bit earlier, and then be back to pick Suzie and the students up a bit early too; it was rather windy, and there was a risk of them getting cold. So I was off, after having only surveyed a few meters. Oh well! I drove back, found the girl, waited for her to get ready, drove her to the railway station, and drove back to where I had come from. I saw some dots on the other side of the estuary; I figured that was them! I headed towards them. But after a while I saw dots on my side of the estuary too. That might be them instead! And it was. So no heroic river crossings for me! I brought Suzie back to the cottages (the students went in another vehicle) and that was my surveying adventure.

In the evening I tried to do some work (I have to review a book) and I helped Suzie with dinner. She hadn't sat down the whole day! She was cooking for nine while simultaneously teaching the students either Excel or Matlab. She's some sort of superwoman! But one that tends to be shattered at the end of the fieldtrip.

We ate late, as the technicians weren't back any earlier, and immediately after dinner I went to bed. In a way, a successful day!