After helping me with The Big Ceiling, Phil was willing to help with the next one, in the landing, too. He appeared in the morning. I had got the room ready! It was empty, except for a ladder, a plank and a tarp. The ladder and the plank were for covering the staircase, and the tarp was for catching all the rubble.

We faffed a bit with the ladder and the plank; in the end we used the plank from the ladder platform. Then we covered everything with the tarp. And then we could start! 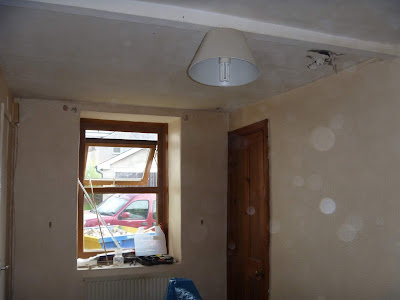 This time Phil was only about twice as fast as I was. I suppose that might have been because this plaster board hadn't been plastered; that meant it had less strength, and came off under my weight. We made good progress!

After a while we had a coffee break. Phil had pulled such dusty bits down we couldn't breathe! We had the coffee in the garden; while we were there, the neighbour (not Alan; the one on th eother side) addressed me. It was nice to meet her! She wanted to prune a tree that was growing in my garden and had started to hang its branches in hers. No problem! And she spoke (was) Welsh! 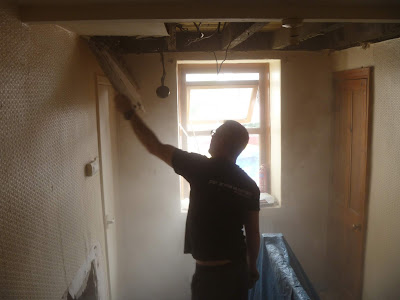 Pulling down big slabs (and releasing lots of dust)

After coffee we finished the ceiling job. This went so well!

I wondered if I would need insulation between the beams. Phil said I probably didn't. He said thin insulation wouldn't do much, and thick insulation would hide the beams. So I intend to leave this ceiling as is! With the electricity cable tucked away a bit more neatly, though. The unsightly spaghetti we uncovered is not here to stay! 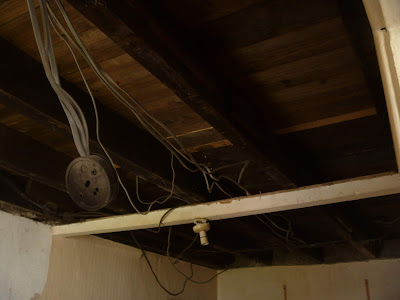 The fnished ceiling! I think that cross beam will have to go too...

After we had pulled everything down we chucked the plasterboard in buckets, put the buckets in my car, and emptied the small bits from the tarp into a bucket too. Sorted! We then swept, hoovered and mopped the floor. It was starting to look again like the joiner had left it!

On request, Phil helped me take out the carpet from the living room, try to get as much dust out as we could, and then put it back. I would take out the buckets to the recycling centre on my own. Phil had to go and pick up his son!

We had only been a few hours! It had been such a productive morning. And this was the dustiest jobs done now! I could go and clean up now. It seemed so futile after the first round of dust-creating; I knew I would do it again. It felt really good to have this job over with! Thanks Phil! I'll come and work in your garden some day soon to repay the favour...
Posted by Margot at 13:55