Everybody is talking about the June general elections, but there also were local elections. For me these are more evocative as I actually get to vote. But for whom? I found out who the candidates were: two Welsh Labour people, three Plaid Cymru people, and one independent candidate. I googled them. No information. I had flyers in the letterbox from all of them but that didn't really help. They all promise the moon on a stick. I wasn't too sure of what to vote. Plaid Cymru has a reasonably good name when it comes to education; I decided that I would go for one of them. The Plaid flyer helped me choose one of them. 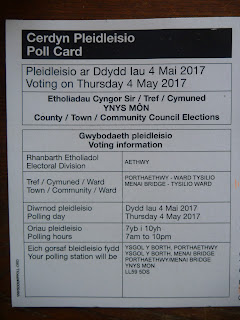 Then it was election day; I went to the polling station, where a man pointed out I could vote for three people. Three? That's half of them! But there are three council seats to give away, so you can vote for all three. You don't have to cast three votes, though. And in a way you should cast every vote you can but I figured that either I would vote without choosing by voting for more than one candidate, which seemed silly, or vote for all these Plaid people without making a distinction. I decided to vote for the one person I had picked. Later I thought that was stupid, but well, this time it doesn't make an enormous difference. No parties I really like were competing, no parties I really dislike were competing.

I was still contemplating this when I came across a concept I hadn't heard of; vote swapping. If you live in a constituency where your candidate doesn't stand a chance you can try to find someone (via internet, generally) who lives in a constituency where your candidate does stand a chance but theirs doesn't. You help vote their candidate in in your constituency and the other person helps vote in yours. I think this is mainly a general elections thing, but it could well also work for local elections. And it wouldn't have worked here, I think, as I think in my ward Plaid might sort of win by default, but I liked the idea!

So what was the result? I sort of said it; all three Plaid candidates were voted in. They each got 22-23% of the vote, with the independent person getting 15% and the Labour people 9% each. Two of them already were councillors last time. I hope they will represent me well!
Posted by Margot at 08:39