Save the ancient camera

One evening I took some pictures underground and placed them online. The next time I saw the underground men, one of them asked if there was a problem with my camera; the pictures were a bit blurry. I assumed that was because I had taken them without a tripod; that's asking for trouble. I know the glass cover of the camera is getting a bit etched, but if I use a tripod I can still take perfectly sharp pictures with it. Not so much with its predecessor; that was the camera that lived through the strangest things, such as being bathed, on the inside, in ocean water; I had managed to keep it going with mechanical additions. I the end I had to retire it when the glass cover had etched so much the autofocus didn't work anymore. And it being a fully automatic camera that meant the end. I kept it, though, as I thought it was such a cool piece of kit.

David mentioned it might be possible to repair the glass. He was thinking of my new camera, but I was thinking of the old one. I had thought of repairing it myself; I had googled around looking for solutions. I had heard of some stuff, clear resin or something, you can smear over scratches, which fills them up without (much) optic distortion. That sounded good! But I couldn't find it. But David mentioned polishing the glass; not adding material, but removing it! Maybe that could work. He mentioned a Dremel for the purpose. I have one! And he said he had some polishing liquid. It was well worth the try. I had very little to lose!

By sheer coincidence I found a left-over glass cover for a microslide when I was making a new reference collection. It was clear glass with a matt side you could write on. Perfect! I could see if I could polish the matt bit, while having the smooth bit as a test of whether the polishing would actually make things worse. I set to work!

The results were encouraging! The smooth glass wasn't affected but the matt bit became decidedly less matt. I decided to give it a go on the camera! I polished it, shoved a battery in, noticed it still had a memory card, and gave it a go. It could focus again! And it will never be as good as it was when it was brand new but I'm taking that camera with me next time I go underground. Hurray for keeping a camera going for a long time under trying circumstances! 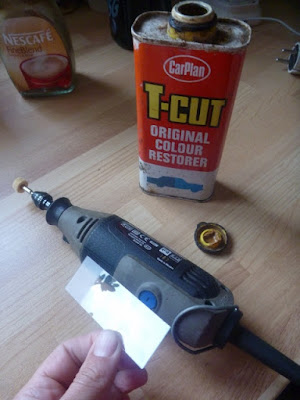 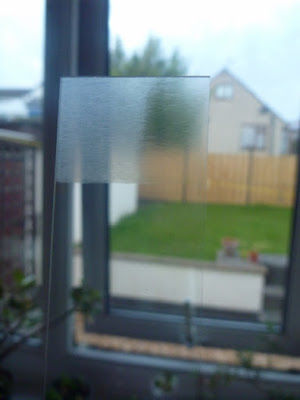 The glass cover slide with its part-polished matt bit 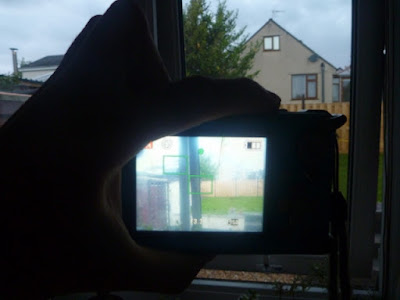 The old camera focusses again!
Posted by Margot at 10:21