It was already May and we hadn't climbed outdoors yet! Maybe some of us had on non-Monday night trips but I hadn't. Last year we started in April. I was glad to get the email that would change! And we would go back to Holyhead Mountain. I liked it there! The ancient quartzites have a lot of charm. But I should have known we would not go to the same place. The first outdoor climb of the year tends to be easy!

We gathered with four and lugged the kit to the hill. I was glad we found ourselves in the protection of the mountain; the rest of the world experienced a howling gale. We first had to set up a top rope. That's a lot of faff! While we were at it we saw Simon and his dog appear. He was doing his Mountain Leader qualification, and his elbow hurt, so he would just practice his leader skills.

I spent my time between helping set up the top rope and helping Simon by pretending I was one of his charges. And, I admit, I slotted in some flirting with the dog. He is cute! 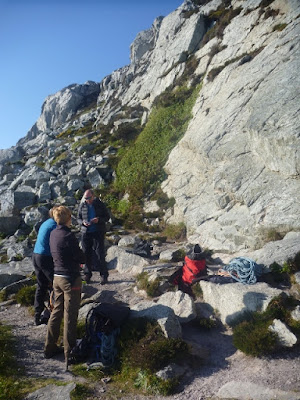 Arriving at the foot of the mountain 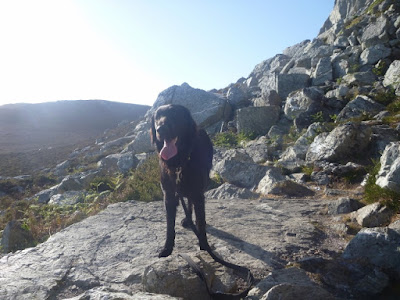 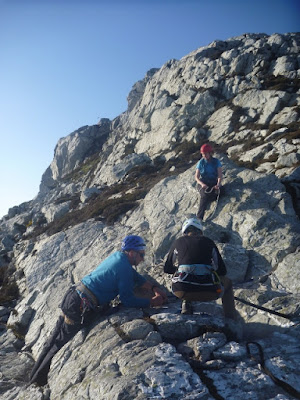 Setting up a top rope 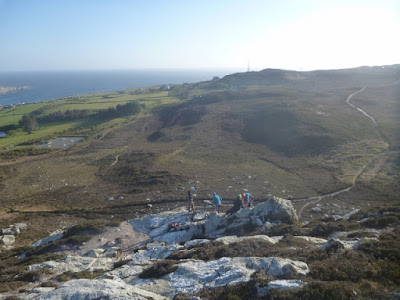 When the rope was ready Ika and I looked at it. She can be quite impatient too. We decided to go for it, even though she looked at the route and asked: "do we really need the rope?". We climbed it. But it was meant as a trad route; we then took turns trad climbing it, but with a top rope as safety measure as none of us were very experienced with that. When I had my turn, Eifion then went up to take my gear out; he said it wasn't placed that well but it would probably have held me. Not bad for a first time I'd say!

By then it was time to go. Simon and the dog had already gone; the dog was hungry, and had already made that point by staring intently at me, drooling into his chest hair, when I sat down to eat a sandwich. We de-rigged and walked back. It had been a nice evening! Climbing trad is not high on my priority list but I might ease into it anyway... it does open up a lot more possibilities!
Posted by Margot at 22:27