Back to the scary pitch

Some two weeks ago we had done a trip in the more remote areas of our usual mine. Along the way we had dropped a pitch which went past a plateau with a level running off it. We wanted to know what was there! We weren't keen on coming in from the top so we would approach the place from the bottom. We knew there was a ladder nearby we could borrow (it went up a chamber that had two ways up, so nobody would get into trouble if we removed it) to make bolting up a slab easier. So we set to work!

We went in, went past the passage I had helped blow up (it was finished now, an looked good), and went down to the chamber which would lead us to that pitch. I had gone ahead with Edwyn; we first checked out another ladder we could borrow, but that one was a lot shorter. We went to the other one.

There things got a bit messy. Edwyn started to faff with the ladder, I decided to go up the other way for the heck of it. Jason followed me, David clearly had an idea of how to go about things without having told anyone and getting annoyed if we did things differently, then Edwyn loosened the ladder from above and started walking around to the other way down. I lowered the ladder to Don; David and Jay took it away. I decided to wait for Edwyn and Jason. It was one of those nights again; if you don't do things the way David wants you to (without telling you what that is) you get yelled at. We're not even married!

By the time Edwyn, Jason and me got to where the others were, they were having a sandwich. I went up the first slab (we needed the ladder for the second one); soon afterwards David and Jason attached the ladder to the rope and I could pull it up. Soon more of us were up and we had a look at the slab. I had a look at what looked like a bit of a traverse. That way, it dawned on us, would probably be more interesting! We would need to install some sort of safety line though; the drop was intimidating. I thought of starting it but the rope was snagged and by the time I had retrieved it Edwyn had taken my place. Maybe he was the right person for it; he has no fear and making a traverse with improvised material on such an exposed ledge is not for those who have a lot of it. Around that time Jay and Mick decided to go back; Jay had an early shift the next morning, and Mick wasn't feeling well. And this would take a while.

Edwyn did a great job and not too much later he was across. Time for us to follow! It was less hairy than it seemed from a distance. We left the ladder in place; some other day we still wanted to explore that level above. But not tonight.

Crossing the traverse we first went left; there was one chamber there. The level, though, was still full of original bootprints, and had lots of relics in it. Cool! I was using my newly repaired camera to document that and got away with it.

In the other direction there was a long level, going dead in the end, with a few side passages that had all collapsed. When we had seen all that we dropped down the pitch that Edwyn had already found. This pitch is rigged with a dynamic rope; that gives rise to some hilarity. We all got down safely and legged it out. Edwyn and I were out by 23:24; we still had to wait for the others, walk back to the cars, eat the cake Mick had left for us, change, and drive home. And shower. A late night but a successful one! 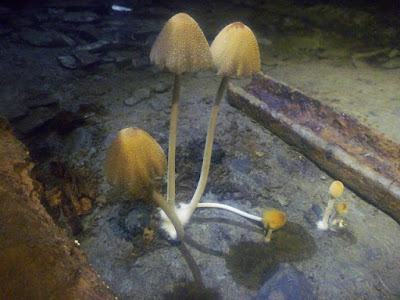 Pretty mushrooms we found on the way 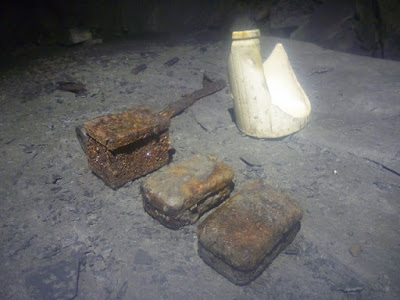 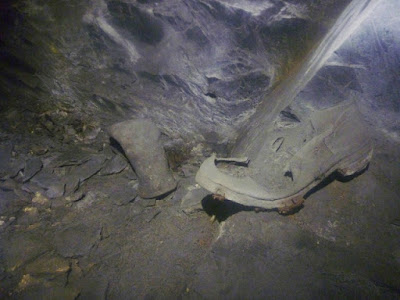 A shoe and a hat 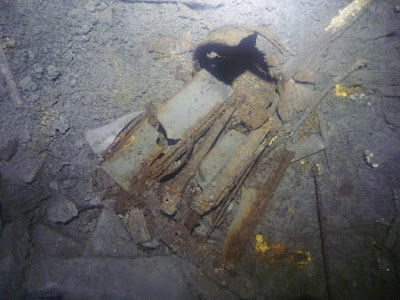 Remains of a lantern