Further up in the dig

This week would be exciting! We had dug upwards once; the first session is the easiest. The next step had looked harder. We'd see soon how it would go. I thought I'd meet Miles at the manager's office but he was a bit late; we arrived at the parking lot at the same time. At least that saved me walking up in my warm furry suit. We got in; this time he had brought resin. I knew that would mean I would have to go and get the resin gun from deeper in the mine. I also wanted to get the longer detonation wire; we had only had the short one and it can be nice to be a bit further away from blasts. And I wanted the long-ish metal rod; if you work upwards, you might sometimes want to prod things from a slightly larger distance than our small crowbar allows. A lot of lugging. I also retrieved a lighter; we now have our breaks in Generator Chamber, but the generator is so noisy it's nicer to switch it off for breaks and light the place with a few candles. But one needs a lighter to accomplish that. Quite soon I was on my way. I came back all sweaty, but with all we needed!

Miles was thinking of making the lowest bit of the new passage a bit wider but I had clambered ahead (what else is new) and had started to have a look at the next step. The previous time I had thought I  had seen that this was a horizontal slab which leaned very heavily against the wall. I noticed now I could worm past. That way I ended up above it; I threw everything down that was loose and noticed the slab was actually only loosely leaning against the wall. Let's get rid of it! That meant getting the drill from Miles. That was the end of his drilling adventures for that night. I tried to drill holes in the slab, which didn't work so well; then I tried to chisel it out of the way, which didn't work so well either, and finally I managed one drill hole. It was just big enough for two charges! That split the rock, but didn't shatter it, so I spent some time trying to chuck both halves down. One half went without much complaining; the other one put up such opposition I had to leave it in place in the end. At least it was out of the way! And next time I can sort it out once and for all. 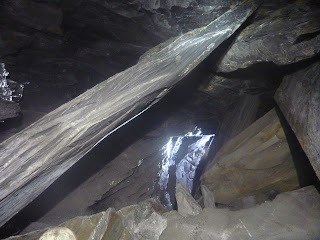 Not a very clear picture, but the diagonal rock is the one that resisted me, and the light below is Miles' and he is inside the passage we made. We are already quite many meters above the chamber floor!

I also looked ahead; the next stretch was a narrow passage (well, not yet passable, but we'll come to that) between a very large and reassuring rock and the wall. I couldn't see very well what was behind that! But so far it looked all very promising. It was nice to make good progress again after the very short stalling at chamber X...
Posted by Margot at 09:16