New for us, that is. We drive very, very often through Nant Ffrancon on our way to some underground venue or other. I drive through it for other reasons too. And pretty much as soon as you drive into it from the coastal side, you see a small mine on your right. You see some little holes in the hillside, and some modest spoil heaps. I had never been there. Neither had David. It turned out that Phil had; many years ago, with his then rather young son. They hadn't explored the entire place; that wouldn't be a good idea with a child. But now we would have a look! We chose this place this week as Phil could come but only if the venue wasn't too far away from Anglesey, where he would have been working during the day. And this place was perfect for that!

We gathered and changed. We chose some bolts and such for rigging the place. Then we set off! We had the dynamic due Dan and Flic with us; that doesn't happen very often. We walked to the entrance and slipped inside. Soon we came to a place we recognised from Phil's pictures; a hole in the ground with rails pendant above it. You could get past the hole thanks to the rails. It was down that hole we wished to go. And there was a continuation of the level a bit higher up, but it looked impossible to get to it, and trying meant risking falling down the hole. That needed more bolting. We had to first figure out where to place the bolts for both directions we wanted to go. David had brought a drill. 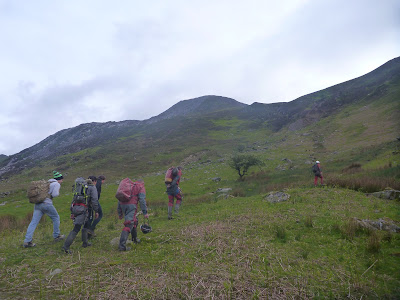 Walking up; as usual, Phil is racing ahead. 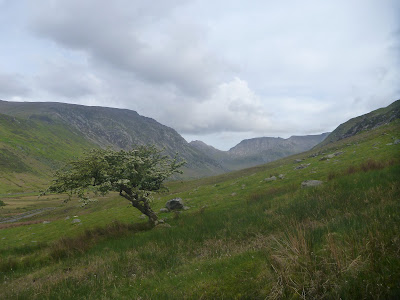 Nice views from the way up.


While David was pondering I explored ahead; there was the bottom of a shaft or winze there. And nice blue and green dripstones! But not much else.

David tried a bolt here and there but the rock wasn't very good. Neither were the bolts we had brought. In the end we decided to forget about going up, and go down by rigging from the rails. I was the first to go down. When I was only two meters down Phil said he wasn't happy with the rigging. He wanted it differently! Oh dear. It sounded like that needed more gear, and David would have to supply it, but I imagined that would lead to shouting again. He had just sat down with a cup of tea! And I was happy with the rigging. It is situations like that that give you practice in managing people. I clearly need it, as I should have let Phil sort it out with David and not get involved. I really hate being shouted at! But I didn't handle the situation optimally, addressed David directly and yes, I got shouted at. FFS. But we re-rigged and then I could just go down. Even on this dry day, there was a lot of water coming down the hole, so it was wet business, but I got down and could start exploring. I went left and found rather deep water rather soon. I wasn't quite dressed for it! Oh dear. Then the next person appeared: Dan, who was even more badly dressed to the occasion. We decided to walk into the level, though, until the end; it was blocked (surprise, surprise) and the water came up to my belly button. Cold! 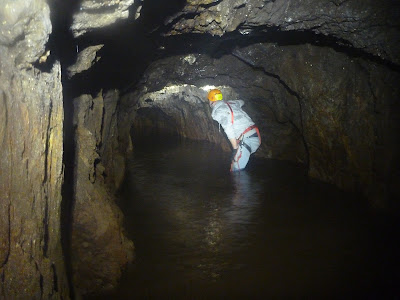 Dan looks into the level; the water keeps getting deeper

When we went back I explored the other side, while more people appeared from above. There wasn't much on the other side. I passed the time by asking Dan and Flic to light up some pictures for me, and then I could go back up. It was a slight faff to get past a beam with large rocks perched on it, but I was OK. I was a bit cold though! I had a cup of tea with Mick who had decided not to go down at all. 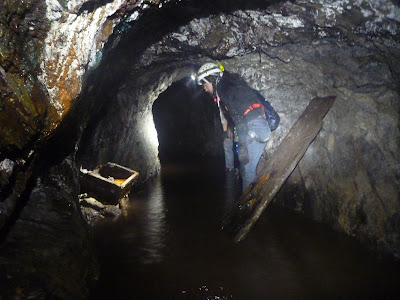 The next person up was Dan, and then Jason followed. We were all cold (because wet) so Jason and I decided to go check the next level up; there we would find the top of the winze we had seen from below. Mick had gone to have a look while we were down below. We scampered up and took some pictures. There was a continuation of the level a bit higher up (deja-vu!), but you couldn't get there without risking falling into the winze (more deja-vu), and we were too cold to fancy getting the drill and bolting the place. And the rock here might be a bit iffy too. And anyway, the chance that there would be much ahead was slim. We took some pics and went back down. 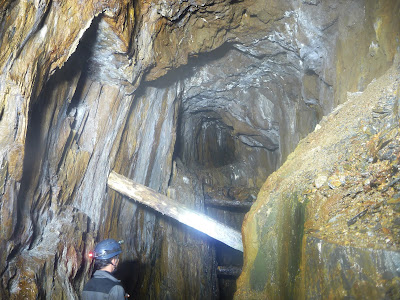 Jason in the top adit; the winze is in front of him.

More cold people had emerged from the level. We decided to skedaddle! When we got down to the road we had to decide if we wanted to check some level that allegedly was a bit further down the road. Dan and Flic were too cold and they went back to their car; we walked on. We couldn't find it! Oh well. Back to the cars. By then the midges were also coming out; time to change and go home!
Posted by Margot at 09:20