We had two students doing a dissertation on cores from our project. One had a core from the Irish Sea; there aren't very many forams in there. The other one had a core from the Minch (offshore Western Scotland, between the mainland and the outer Hebrides); that one was full of forams. And he'd done assemblage studies with them. Once the specimens, identified to species level, have been counted then you might want to keep them so you can check afterwards if you agree with the taxonomy, but otherwise there's not much you can do with them. I thought I might as well raid his samples for the dominant species; that's a big, unmistakable critter, so I am sure I would remain confident in their identification. I could then have these radiocarbon dated; there suddenly was time, now I had the short extra contract...

There was one problem though; when we pick forams we tend to put them in microslides; little cardboard thingies, and we glue them into position. You want them to neatly line up, and not all lie on top of each other in the corner. And the glue we use contains carbon. Shit! You can try to rinse it off as it is water soluble, but how can you tell if you got it all off? So these forams were out.

His samples were so rich, though, that I was certain it wouldn't be an awfully big job to pick some unglued ones out of the sieved residue. He had done the tedious work of sieving and drying and packing; I could just raid his prepared samples! And I'm doing just that! This will be a very well-dated core... 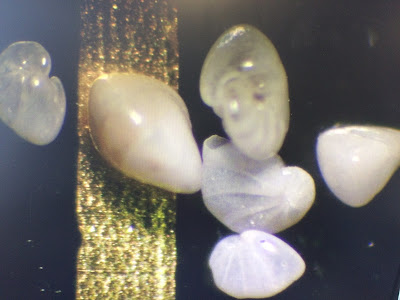 Nonionellina labradorica
Posted by Margot at 09:33