On one's own feet in the dig

This Thursday I would be back in Miles' and my dig, the first time in a fair while! I didn't know how I would find the place; by the time I would get there Miles would have been there for a while. All the others would go on a calm walk through Cwmorthin; David and Rich had two newbie guests each, so they would just show them around. I met David's guests, and changed into my kit. Not all my kit; I noticed I had forgot my insoles. Oh dear! The last time that happened it was quite painful. I hope this time wouldn't be so bad! But I had done some insole-free trials that had gone well, so there was hope.

I went ahead; no need to wait for the others, who would go elsewhere. It was nice to walk up with only a pipe cutter as extra luggage! And my feet felt OK. Soon I was walking through a faint cloud of gunpowder smoke. Stuff was happening in there!

I went through the collapse and greeted Miles. He had just reached a bit of a dead end in his work; the drill bit was stuck in the drill so he could only drill one size hole, and one size does not fit all. We had a small break I had not deserved but he had. Then we went in! Miles had done some work at the far end of the dig. It looked great; he had managed to either get rid of, or wriggle loose, some of the rocks that were in the way. Time to clean up!

I lugged two really big rocks out, and then I removed all the loose stuff. In Dig 2 we do that low-tech; just shove the rubble in the right direction with hands or feet. No buckets. It works! After a few rounds pretty much everything that could safely be removed was removed. Now we could have a good look! The space we had made was so big we could make a plan of progress together, looking onto the space that now needed its big rocks supported, its smaller rocks kept in place and then its exit into whatever was behind it made bigger. But that needed a drill with a different bit. Not tonight!

We packed up. Miles left, and I went to the other dig to get some short bits of scaff that were there. We would be needing them for the supporting work we hoped to start the next week! Then I went back to see if I could do some work on the other dig; there were tasks there that required no kit. unfortunately, I came to where our narrow access tunnel reaches what we call "the void"; or rather, where it used to do that. Rock had come down and blocked the passage! Oh dear. That was the second or third time it had done that. We will have to dig it out again! At some point, the mine will run out of loose stuff it can throw at it. We will persevere!

I removed two loads of rock from the ex-passage, but then it was time to go and meet the others; we had agreed on a meeting time at the exit. I made my way back and found only David and Paul, with whom I shared a car; the others had all left. I reported back and then we went out. We were impressed by how pretty the valley looked in the moonlight, and David tried to capture that beauty on film. The pics looked like they were made in daylight (see below) but it was magic there and then! And still my feet were alright. Another nice end to a good night! 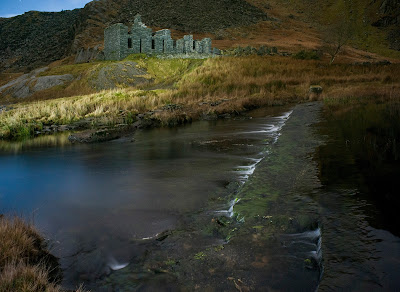 The valley by night; pics by David
Posted by Margot at 09:43