Shoes your own size

In September I tried to break a habit I've had some 15 years. I've had foot problems since I can remember, and at some point in my twenties I settled for dealing with that by using orthopaedic soles. I have worn these ever since. But after my feet coped with forefoot running, I decided to see if I could do without the soles, if I would just walk in a different way. I didn't make a very big effort though; this is important to me, but there are many things important to me, and well, having feet problems for 40 years and 9 months or 40 years and 10 or 11 months doesn't matter very much.

I seem to be only getting better with age. I am faster and stronger than before, and also more mentally strong. And now I might even be on the way of having good feet! That would be great.

When I started to do forefoot running I saw a podologist for a new pair of orthopaedic soles. I tried this one, hoping he could make some that were smaller than the comfortable but bulky ones my old schoemaker in the Netherlands makes. He was quite against forefootr running; he said I had enough foot problems already, and thought that using the problematic part of my foot to take all the strain would make things worse. That was clearly not true! And I can't prove it was the running technique that made the change, but well, I'm certainly not stopping. I've been wearing shoes my own size for days now! I could get used to this! 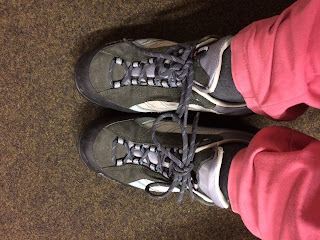 Insole-free shoes!
Posted by Margot at 12:03