Progress in the dig

It would be an interesting day. We could get through to the next passage in the dig! But there was the other dig, Miles' and mine, too; this one had two charges ready to go, and I thought I could set one off before everybody else was down. Some of the men take quite a while to negotiate the pitch. I don't want to blast while they are in their dig; the chance of it dislocating anything is minimal but well, one has better be cautious.

I scampered down, wired up the furthest charge, and set it off. It rather disappointingly went "flop". Oh dear! I think I know why; I had to drill at 90 degrees with the preferred direction as there wasn't enough space to wield the drill otherwise. That way I had drilled straight through the rock, and we had just then been running low on resin to seal the charges in, so the charge might just have dropped into a void underneath the actual rock. Oh dear!

I went back to the others to say I had done the detonation, but then several were still at the top of the pitch. I could set the other one off as well! So I had Phil warn the others and scampered back. The other charge had the desired effect! So I came out again and joined the others.

Time to have a look if we still thought it was a good idea to go through! We decided it was. But we didn't know what we would find, so we would have to be cautious. We decided to go in in pairs; if something goes wrong, you won't have to face that alone, while there would still be several people outside to help you out. We also brought a darren drum with emergency supplies through. One never knows!

David and Phil went first. When they came back they said you could go all the way through the level to the next chamber, but the entrance was blocked by loose rubble. Exciting but also a bit disheartening! But now it was my turn. Stupidly, I was the only person who had a camera with me, so I took pics all along the way. I got through and I saw that there was a fault in the ceiling, which had caused a lot of roof failure, which had lead to a lot of rubble on the floor. Not an easy place to work from! And the next chamber looked like a massive dig. Oh well! 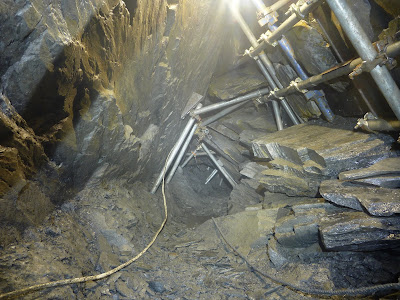 The entrance to the dig

When we were all out we were a bit at a loss. This looked like so much of a challenge it was difficult to see where to start! David and Phil decided to take a breaker bar in and have a rummage at the chamber, but that was a two person job, so I retired into my own dig.

I first tried to get rid of a rock we had previously tried to blow up but which had only cracked. I got the top off! But that meant the bottom was still very much in the way. Bugger! I then tried to remove a lot of mid-sized rubble from the working end of our dig. If  could get rid of it I may see further ahead! But it was uncomfortable. The space restrictions meant you had to prod at the rubble from an unpleasant angle with a way too heavy rod and bang your hands into things and be careful to not get rocks on your head. Made some good progress though! But after a while I figured I needed a tea break. That's nicer in company, so I went to the others.

I found Mick and Paul quite a way back. They said the others were attacking the rubble in the entrance to the chamber and were actually making good progress! That was exciting! They said they checked on them every half hour. I would do the next check. Bringing a camera! But first I had the desired cup of tea.

When I went in I saw the men had indeed made good progress. I stuck my head in; I could clamber into the chamber! I took lots of pictures so as to document the place well. I did not go exploring; the entrance wasn't secured yet and I didn not want to disturb anything. But I could see the passage to the next level! Exciting!

I went back in to the level, and then we all went back. We still eyed the first unsupported bit with suspicion; now we knew it went, we would have to do some more securing of this part of the dig too. Some rocks could still slide down! But that was for next week. Now we could go home triumphantly and inform those that had not been there! New ground, here we come!
Posted by Margot at 09:15