Whoever reads this is simultaneously equilibrating their radiocarbon content with that of the atmosphere. The atmosphere gets continuously replenished by the Sun, so so do you, reader. Upon death one stops breathing, and thus equilibrating, and that's why radiocarbon dating works. But if you are lying around, still in contact with the atmosphere, then even while not breathing there is a chance you incorporate some radiocarbon. And that holds for foraminifera too.

For our project, we date a lot of forams. Most of these are between 15.000 and 27.000 years old, but we have some older ones. These would have lost most of their radiocarbon in the meantime. With a 15.000 year old foram the influence of potential later-acquired radiocarbon is negligible, but with, say, a 44.000 year old foram it may not be. And we have quite a few of these too! And that's the reason I drove to Keyworth some time ago, and got me some samples from the BGS. We knew they would be so old they would have lost all their own radiocarbon; if they have any now, they must have acquired it later. And as these forams will have had a history comparable to the ones we dated, these forams might help us fine-tune our old dates. We might be able to correct for past-death radiocarbon with these. So now, on my short contract, my first aim is prying forams out of these samples. That won't last 185 hours but it's on top of my to do list! And there are forams in there, which is a relief. We couldn't know for sure until we looked! 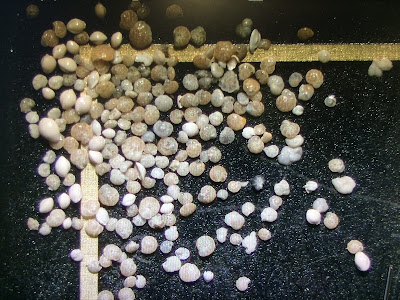 Some of the forams that will help us with our dates
Posted by Margot at 14:52