Too much new terrain

We had pushed into quite a lot of new terrain in one of our digs recently, but we knew that with a modest effort we could push further. So we set out to do just that!

First things first, though; Miles would be in the other dig, and he had done some exciting stuff there. I figured I would be needed in the other dig, as the way on required someone to slither down a narrow and unstable passage, and that job has my name all over it, but I wanted to see what he had been up to first. When we got to the parking lot, armed with scaffolding boards (these are heavy) and scaff clamps, I decided to go ahead. David and I had arrived early, and by the time the others appeared I was ready to go. I grabbed a board and the key, and set off.

I found Miles in our dig. He had been in there for a while! And he had exciting news: we could see further ahead now than before, since he'd done some heavy blasting. But more blasting was needed; I could look into a hole but not go through it. And the rocks were too big to remove! That was for another day though, as Miles was bringing his drill home for repair.

We had a cup of tea and a pork pie and then Miles left. He had important stuff to do early the next morning. That had me join the others in the other dig. I found Phil and David supporting the roof of the chamber that so far had been our final destination. I started digging the exit. In minutes I had made it big enough! I rolled our drum with emergency supplies through and slithered after it.

The passage I ended up in still had an atrocious ceiling. But it went! I walked on to another collapse. I thought I might be able to squeeze past it; there seemed to be a gap, which could easily be made bigger by pulling down some big rocks. I didn't yet want to do that though; the others would hear the sounds and not know if that was good or bad news. I went back to inform the others.

I went back in with Phil. He made the passage a bit wider still while I tackled the gap in the next collapse. I removed the nuisance rocks, and it went! I tried to take some pics, missing my normal (and very bright) light, which was away for maintenance. Phil came through too. I had a look in the next level behind the collapse. That went too! Still with a very bad ceiling. But Phil had to leave early, so we went back to tell the others. 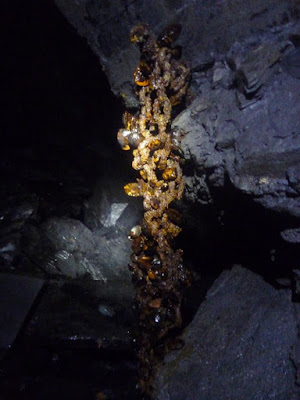 As the roof has crumbled everywhere we did not find many artefacts; these would be covered by the rubble. The only man-made thing other than the spaces themselves we found was this nicely rusty chain.

Phil left, and would send David in. He is in a way the master of the dig, together with Don who was not with us due to  his still recent hernia operation, and he should see all this. While he was on his way I headed into the chamber, this time with my torch with me; that's quite bright so I finally got a bit of a look. But I went back to welcome David.

We went on; he fit through the hole in the collapse too. We went into the chamber I had not yet entered; we saw no exits, but maybe they were buried below rubble. There still was plenty of that! Then we went on. We stuck our head into another rat hole further on, and David had a rummage in the rat hole that would probably be our way on. But we didn't want to go any further; the entire way the ceiling was dodgy as anything, and the more of that you have behind you, the bigger the chance a large chunk will come down and block your way out. We needed to do a bit more securing before we would go any further! 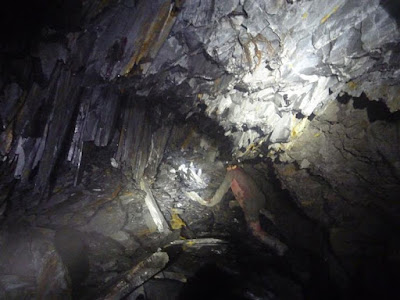 David having a look ahead. The ceiling needs some attention.

We went back. Before we went up and out David also had a look in Miles' dig, and was duly impressed. Then we went out! By exception we would not be back that weekend; Phil was travelling, David had car things to do, and I was actually quite in need of a calm weekend with some chores and some catching up on stuff such as my PGCertHE. But we'll be back! It is still too exciting for words...
Posted by Margot at 08:48