The day had come we did not go to our dig on Thursday night. Mick had a different plan: he wanted to rig a small mine with an SRT pitch and some handlines, so he cold take Zen, his girlfriend's son's ex-girlfriend (it's complicated!) and her (new) boyfriend there in the new year. She had done a fair amount of SRT stuff, but pretty much always only down. It was time for her to practice prussicking up! And Mick had decided that Hafod Uchaf was the right place for it. We'd found that mine two years previous, and had recognised its potential for a small round trip. I would have bailed out if something would be going on in Miles' and my dig, but Miles was otherwise engaged, so that will have to wait for the new year.

There were only four of us. We wallked the long way to the mine (it's very small and it was dark, we wandered a bit) and hqad a look at where to put the pitch. There were two options: along a steep slab, or straight down. David tried the slab frst, but it wasn't ideal. Then we went for a compromise; first a meter down the slab and then down a vertical passage. We rigged it and I tried it. No nasty rubbing points! Then it was time to put a handline down the side. You can just scramble down to the bottom of the pitch, and back up, but maybe that could be a bit newbiefied as well. The last thing we needed to do was install a bolt for another small pitch further in. That created a ready-rigged round trip! And that meant we were done. Time to wander back to the cars! This would be my last underground trip of the year. But the new year will hardly have started before I expect to be back right there, as Zen's personal SRT instructor! 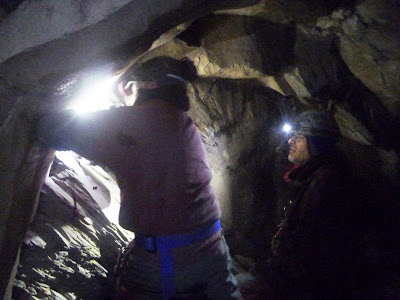