More excitement in the dig

We knew our dig went, but we had some serious scaffolding to do. So we came back on a Sunday. Several people either pulled out or said they weren't sure they could make it; I travelled up with David and hoped for the best. We were early, and wandered a bit along the reservoir before ordering breakfast in the cafe. Soon Phil and Mick arrived; the former fighting fit, the latter not so much; he would go home after breakfast. Edwyn texted he couldn't make it. That made three!

We took some scaffolding from Miles' pile and went to the pitch. The men had one long pole while I had two shorter ones; I did struggle with that. But when Phil had dumped his he came back to take one off my hands. Nice! When we got down we found the bag one of the men had forgot there the previous day. I had been warned it contained perishable foodstuffs; I was advised to eat them today, so I carried it through.

We figured we needed two long ones for the entrance into the chamber; I started taking one through and manoeuvring it through the opening. Then David appeared who tried to make the opening a bit bigger. It's fine for me, but that doesn't mean it's fine for all! After that Phil appeared with the next one; we put that in position together. Then the difficult task of putting cross-bars in waited; we first measured how long they had to be. We had to cut them to size in the other chamber and lug them through.

Fixing the cross-bars was a challenge; putting the connectors on on the near side was fine, but for the far side I had to pretty much hover over a gaping hole, somehow bracing myself with my feet on the crumbling wall, while wrestling with uncollaborative connectors and trying not to dislodge anything onto Phil's head. But we managed! I then put some short bit in at the top, to stop stuff from sliding down and either hitting us on the head or blocking our exit. That felt good!

When that was done I went for a little scamper. I knew the chamber went up a fair bit but hadn't been. Maybe my timing was bad as my light was dying; I had given my normal light to the Yorkshire lot for maintenance, and was wearing my spare. That one doesn't manage long with a set of batteries! But I clambered up; massive chunks of ceiling had come down. I went all the way until I could vaguely make out the back wall. My dim light was a bit of a nuisance now! And my torch was in my bag, in the previous passage.

I came back and saw the men had added to our marvellous structure. I thought I'd go and have a tentative start at digging out the exit while the men removed rocks from high up that still could slide down into our exit. The passage was full of rubble but I made good progress, even though clearing a passage from the top is a bit tiresome. And once you were in there with your head and shoulders you didn't have a lot of room left to throw things behind you.

In the meantime time went close to our curfew. We mucked the exit out a bit bit more, and the men made plans for supporting the roof a bit, and making a safe passage, as the ceiling really isn't good in that chamber. But then we had to go! We crawled back to the start of the dig, had a cup of tea, and went out. It was sunny outside! 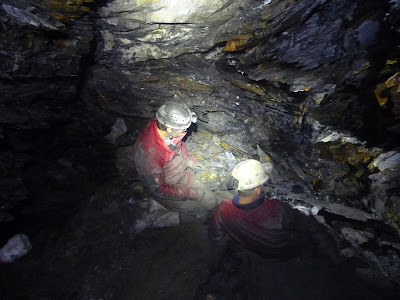 David and Phil having a little rest in the chamber

We reported back on the forum. Would we be back on Thursday? To me nothing else would make sense, but some people were getting a bit tired of the dig. But these never came up with valid alternatives, so we'd see! This project was very exciting; we might be able to get in to the passage with one more session. And Miles' dig hadn't received much attention lately. That needed to change too!
Posted by Margot at 11:29