About a week before my dad arrived I suddenly got the email from Sanja. She was sailing along the British west coast and figured she could pay me a visit. Talk about surprises! I wasn't sure if she would show up while my dad would still be there but I figured all would sort itself out. And it did.

For reasons of sailing (about which I don't know much) they kept to the west coast so they ended up in Ireland. No problem! There is a ferry from Dublin to Holyhead, which Sanja said she'd take. From there she wanted to bike, but Anglesey was a bit larger than she initially thought. She'd arrive at 18:40 and it's a fair way. I suggested I load my tent onto my bike and ride her way. There is a very convenient bike route (route 8) all the way from Holyhead to pretty much my house, so it figured to find a place along the way. I thought something with a lake would be nice, and the only feasible lake was Llyn Coron. I had no idea what it was like, but I liked the nearby Aberffraw dunes. I just hoped the lake would be good too! I missed my local adviser David, who was away, and probably busy, so I didn't want to phone him. It would have to do.

I packed some random foodstuffs and two Welsh beers in addition to my tent and accoutrements, and started biking. It was a fair way! I got there about 19:15 and scouted the terrain. It wasn't exactly as I hoped; the lake was smelly and the creek leading into it was worse. That wasn't good! Swimming looked unlikely and drinking water was yet to be found. I walked along the path and luckily did find a small stream that looked good. A good tent spot was quickly found. I unloaded the bike and planted it at the entrance of the path; we hadn't made any clearer plans than "meeting in the NW corner of the lake", so I thought indicating the path would help. I then settled with a book. After a while I heard a thump! And that was Sanja leading her bike over the bump at the start of the path. Yay!

I showed her the tent spot and the water source. It was a bit muddy but would do. Then we pitched the tent and gathered the food (she had also brought random foodstuffs) and had a picnic, overlooking the lake in the fading light. It was great! As we had spoken Norwegian in Tromsø I wanted to speak that now too. Having mailed to and fro the past days had brought the language closer to the surface. So it worked! She forgave me for the occasional Welsh phrase that slipped out.

It turned out she was working for a consultance firm established by a chap who likes to go off on a boat for long periods herself, so she had taken a year off to sail from Tromsø to at least La Coruna. From there they'd see. She liked the job. It sounded great! And her boyfriend had also managed to take a year off. It sounded typically adventurous! So we discussed what our lives were like, and I was brought up to date regarding other Tromsø folk. It sounded like most were doing well!

Time flew and at some point we had to go to bed, which we did. I had, of course, not drunk enough, and I was sweaty which I very much dislike when going to bed, so I slept badly. Oh well! I woke up to a calm pink morning, crept out of the tent, and started making coffee. Then I called Sanja. Then we had breakfast. 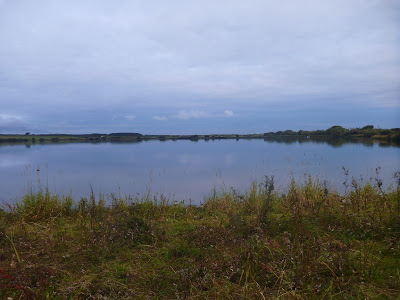 Llyn Coron in the early morning 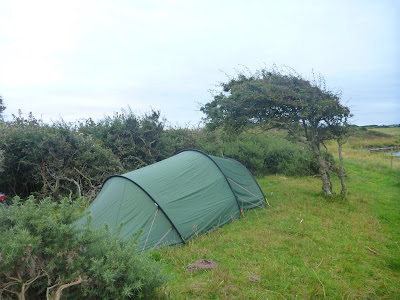 Our home for the night

We then loaded up and biked home. It was a fair way! Once there it was time to enjoy some mod coms: tapwater, for instance. Some tea was in order! Sanja was keen to have a shower after three months on a boat. Then it was lunch time. And after that we walked into town; Sanja wanted to know what it was like. On the way back we came past a bench overlooking the strait. We sat down and just enjoyed the view. We were sleepy! We didn't do much more that day. We cooked and ate dinner and made plans for the next day; I had to go to work but Sanja would bike to the Ogwen Valley and climb Tryfan. I possibly would be climbing that next evening but I didn't know where yet. I'd just see!

When I got up in the morning the climbing mail was there. We'd be just beyond Tryfan; perfect! I wrote Sanja a note to say where exactly we would be and went to work. After work I drove to what I thought was the agreed place, found out it was the wrong place, found some others, drove to the correct place indicated by Eifion, texted Sanja where we would be, and then got ready for climbing. It was a beautiful day and the Ogwen Valley is stunning! And the climbing was good. But I was a bit restless. Would Sanja appear? That shows I still have a lot to learn.

I wondered if she would have biked home anyway. I didn't want to be out climbing late while she was at my place! I don't get a guest like that every day. I told the others I was leaving, got my rope back, and walked to the car. Along the way I thought I saw a small figure on a bike. And it was Sanja! We caught up a bit but quickly plonked her bike in the boot of the car as we were plagued by midges. We went home, but there we needed to get some food. The four crosses didn't serve food anymore; neither did the Anglesey Arms, the Bridge or the Hide-out. We saw the Taste of India being open but they only did take-away at that our. Grudgingly they served us that, and then we could go home, eat, and go to bed. The next day Sanja would leave! The boat was waiting.

I biked her to the roundabout where route 8 signs started and said goodbye. I should make sure I go and visit her too one day soon! 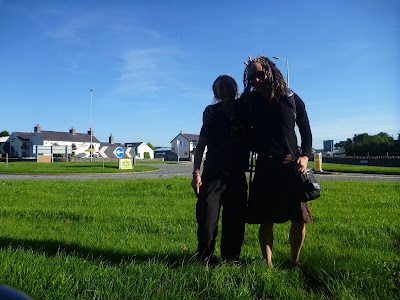 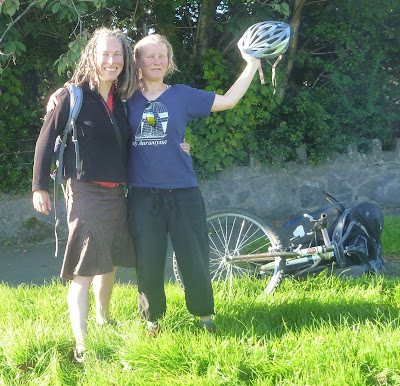 And a less ary one in which we are actually recognisable
Posted by Margot at 08:40