Underground where before we just walked past

Twice I walked past Cwt-y-Bugail mine. Once scouting, and once with my parents. It looks like a nice cute small mine. And you get there via a very nice leisurely tramway! So when several of us had been away at the Cropredy festival for two weeks, and I had been having lots of guests, and many of us had not been underground for two weeks. And many of us were tired. Someone suggested Cwt-y-Bugail, and we went for it. With my dad I had seen the junction in the tramway we would be coming from; it was nice to now see it the whole way. And then the mine! I would finally see it. And there was more to it than I thought. The spoil heaps are so small, but we ended up seeing many impressive chambers!

The walk up was nice. When we got close we saw a white Landrover approach. Would that be Miles, of Go Below? It turned out not to be. Instead it was a chap for South Snowdonia Mountain Rescue, scouting locations for an exercise. Having bumped into us he wondered if a shared exercise would be in order. We thought it would! But we also thought the midges were getting unbearable so we parted ways; we wanted to get underground, where the midges don't go. 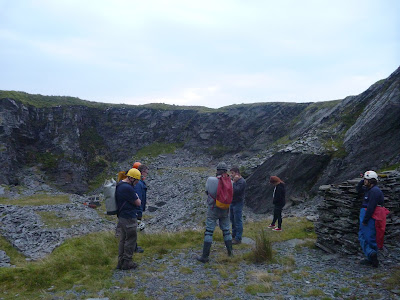 Discussing with the MRT chap

We explored one entrance, which contained some machinery, a loaded-up cart, and a fallen-over crane. Nice! We also spent some time just lying around and looking at the darkening sky and eating apples. A relaxed night! Another entrance allowed us to drop a level. It went a fair way! I didn't try to take pictures in that part of the mine; I didn't have my tripod with me and the chambers were huge. But it was enjoyable. 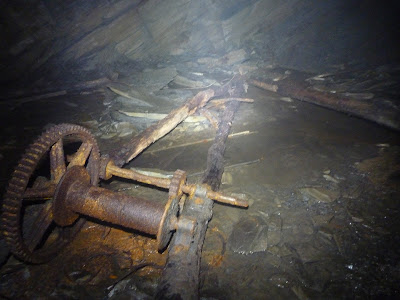 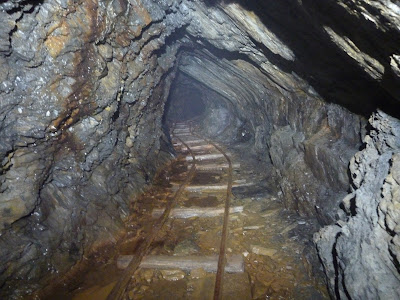 Some of the best sleepers I've ever seen underground

Pretty much everytime you see a spoil heap on the surface it's worth checking underground! Which means I still have a LOT to explore...
Posted by Margot at 08:10