On the James Cook, I noticed I had a small lump in my hand. It sat on the joint of my ring finger, just above the palm. It bruised easily and wasn't very comfortable. I wondered what it was. I considered going to the doctor but I tend to see if unusual physical features vanish of their own accord before I do so. So I waited! And it didn't bother me too much for a while.

Recently, it bothered me again. My pull-ups seemed to make things worse. And it felt like the tendon sometimes got stuck behind it. Maybe time, about a year later, to pop to the doctor after all! Which is what I did.

She felt the bump and mentioned it was some abnormal growth which would cause the tendon of my finger to contract and pull my finger in. I can fully stretch it now, but I run the risk of losing that ability. She didn't give me the name of that ailment, but I immediately knew enough! This was a description of Viking Hand, or, as it is more officially known, of Dupuytren's contracture. Oh dear. I didn't see that coming! The people I know that have it are in a later stage, which is a bit more prominent, and I hadn't recognised my mild symptoms as the same thing. 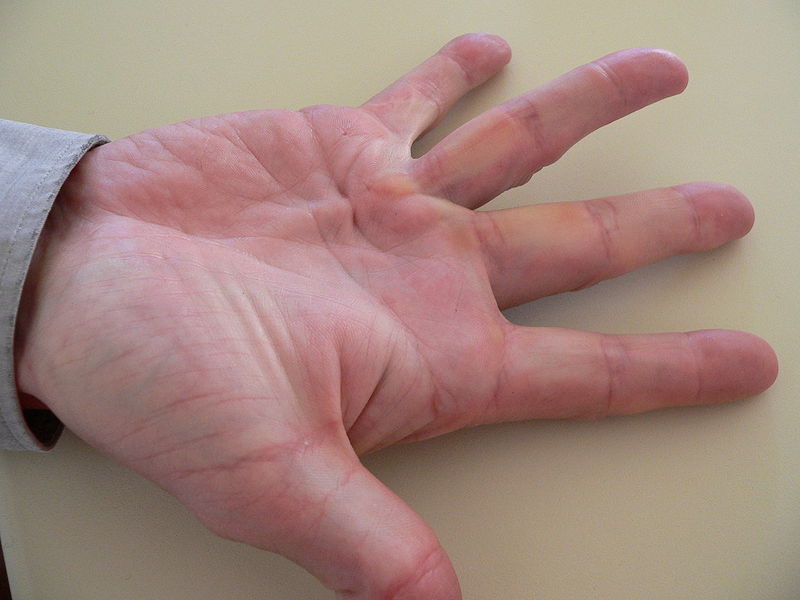 This is what my hand will start looking like (albeit in my case it will be my left hand, fortunately). Pic by Frank C. Müller

So now what? The website of the associated society suggests in the early stage you can get radiation therapy. Beyond that stage, surgery or steroid injections become options once the contracture becomes too much of a nuisance. Should I try to get radiated? I could imagine it's a hassle, and I don't know how fast the issue will progress. Maybe let things run their natural course? Or go and see if I can get onto a waiting list for treatment? As it's a slow disease I have some time to think about it.

A slightly wry thing is that steroid injections are a common treatment. They tried that on my feet, decades ago! It was torture. They couldn't really see where they stuck that needle, of course, so they went by my sounds; when I would start screaming they would know that they had reached the problem bit of my foot, and emptied the syringe. Not pleasant. Maybe fate is bringing these times back, for a laugh?

In the meantime I think of the people I know who have it too: the first was my close colleague Tasha, who introduced me to its existence by finding out she had it. When that happened it was already in the contraction stage; knowing Tasha, she just ignored it in the earlier stages. She would walk around on a broken leg for weeks.

Then there was my colleague in Plymouth Chris. And the latest is my fellow climber Tony. He's our best climber, and his hand is also already in the next stage. I am glad to see he can still climb really well with a hand like that! And he says it does not hurt, although he also mention discomfort while doing pull-ups. But that is a detail. My future, although now festooned with a nuisance, still looks rosy...


PS I remembered my old caving mate Lionel had it too. It didn't stop him either!
Posted by Margot at 11:25