Crawl a cave for archaeologists

The SEACAMS people not only have a recently opened building; they also have snazzy equipment, and friends and connections. So when one of their archaeological connections asked them to use their cutting edge laser scanner to scan a cave in which neolithic human remains had been found, they not only said yes, but also opened a can of cave-familiar friends. Or in other words, when Guy was asked to do the scan he asked David and me to join him. And we did! David was needed for underground photography; the laser scanner normally takes pictures to inform it of what it has scanned, but in a dark space it can't. And I was invited as there was a narrow passage they wished to have explored. So off we went!

We drove to Trelawnyd, near Prestatyn, where the cave (Gop Hill Cave) was. It was part of a famous ensemble of cave and cairn; the cairn seemed to be the second biggest in the UK. We met the lady on whose land the cave was; she was very nice. Then we started to get ready. 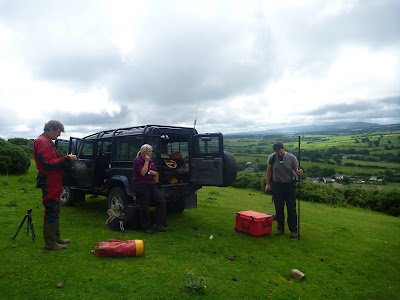 The Landrover got the kit close to the entrance. The view was nice!

Guy and his mate Steve got the scanner out, and the targets that come with it which help with stitching various scans together. David and I changed into our caving suits. Soon we were all ready! 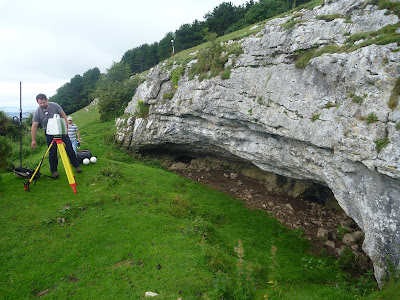 The cave entrance and the scanner. The white balls are targets

I had a look in the main chamber; that was rather small. Then I went into the narrow passage; it was narrow indeed! Guy had said it was unexplored, but I figured that was unlikely given the fame of the place and its accessibility. And indeed; there were signs of human entry all the way until it got so narrow no adult human could go any further. I tried to take some pictures in the narrow space and that was my day done. I had offered to also be lighting assistant to David so I didn't change yet. I decided to have a coffee in the sun and read an article to pass the time both pleasantly and usefully.

David turned out to not need me with light, but he realised he hadn't brought a macro lens, and there were nice crinoids in the walls and ceiling of the cave. I took it upon myself to try and document them with my compact camera. When that was done I changed and had some tea. The I got sleepy and decided to try to have a nap in the sun. I hadn't been quite healthy for a while and this was a good opportunity to try and recharge the battery. 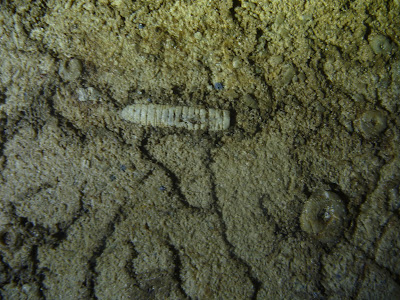 Crinoids and funny mud patterns on the cave wall 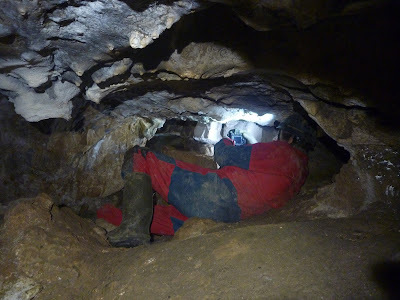 The next thing on the schedule was flying David's drone over the cairn and the cave. We went up to the top of the cairn as it seemed a nice launching spot. It flew around merrily! And the farmer came back to have a look, this time with a baby on her back and a dog by her side. She knew a lot about the place (of course)! And the dog was very keen on fetching sticks. I tend to be perfectly happy to oblige. Very pleasant altogether! But then our job was done. We waited for Guy and Steve to be done (which involved a bit more reading and then it was time to go home. 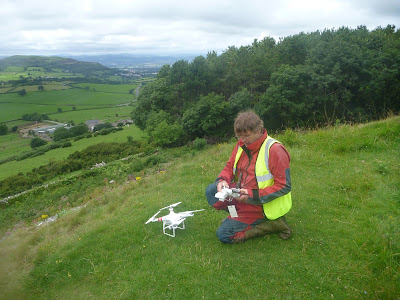 David getting ready for drone flying 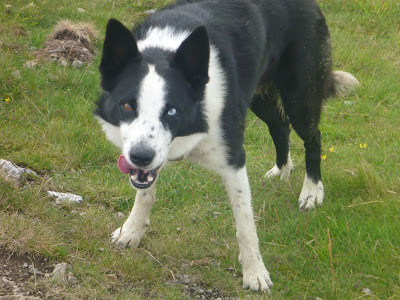 I suppose soon Guy will be able to show us the 3D image. Exciting! The result of a shamelessly relaxed day...
Posted by Margot at 09:13