Blast from the past

I grew up in a boring part of the Netherlands. The most exciting place in the far surroundings was the local library. When I was seventeen, I moved to Amsterdam; quite an exciting place, but in, of course, an urban way. Then I moved to Arctic Norway. And then things changed. Suddenly life was full of outdoor adventures and other very un-Dutch things. Quite the culture shock! But a good one. I learned to speak Norwegian, drive, ski, climb and sea kayak. Live in a society where very every second person you meet has overwintered on Antarctica, traversed the whole of Svalbard on ski, done fieldwork on the remotest places on Earth (such as Bouvetøya) and feels more at home on a windy Arctic mountain peak in the dark than in a shopping street.

As you'd expect in a place like that, I met amazing people to do these things with. One was Sanja. I don't have many friends with whom I have done so many things I never imagined doing when I grew up. Like fishing in a Norwegian fjord, in a creaking old wooden rowing boat. Kayakking at night, under the northern lights. Doing a multi-day ski hike in Finnish Lapland, in December (during which I unfortunately almost killed myself but got away with only sinusitis). Making an enormous heap of reindeer liver pate. Going kayakking in Svalbard fjord. 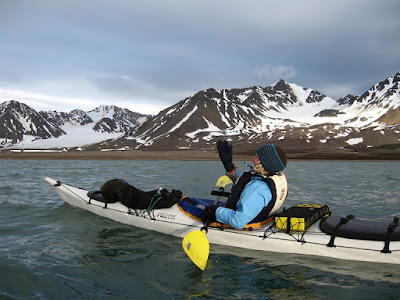 Sanja having fun in a Svalbard fjord (July 2009)

The last time I saw her she came visiting me in Plymouth. I've not visited back! I'm a bit hopeless with staying in touch with people. It's hard enough keeping my ties with my family and old Dutch friends. But she was in the vicinity again (she suddenly mailed me she was at Cape Wrath, about to sail down the British coast, near to which I live) so she thought to pop by. Great!

The time since Plymouth I have made a concerted effort to be more like here. Actually, that concerted effort started in Tromsø, but I am a slow learner and only now I start to notice I'm actually making progress. So what is being like Sanja? Not worrying, not wasting energy on making a fuss over things you can't change anyway, not being a control freak, seizing opportunities, being hospitable (hmm, more work to do there) and making do with what you have. If everyone did that! And I'm far from there; I noticed I am not worrying about the future even though my contract ends in 3.5 months, the world economy is struggling and the UK has dived head-first into Brexit misery. I'll manage! But I am still a bit of a control freak in other aspects (you should se eme pack for a trip) and I am still too obsessed with work to seize all opportunities I could. Although going to Greenland last year was clearly a Sanja-style event. Although she would probably have sailed there, did her own thing, befriended the local population and caught her own dinner. Rather than joining a mountain guide-lead group! But I'm still young. I have time to learn more!
Posted by Margot at 14:52