We see a lot of underground Wales but there is a lot more to see if you can dive. I sometimes see a chap on our forum who does exactly that; he sometimes asks for people willing to help carry diving kit to the part of a mine where the dive will take place. I had never met him, but I am quite curious to find out what's there where we cannot go; so I applaud his efforts and am willing to contribute. And then a mail arrived from Phil: he would show the chap, Paul, the mine where we had been swimming before, and where we would like to take our ROV (which has been out of action for some two years now; such a pity!). If anyone wanted to join? And I was keen; I like underground swimming. And who knows what this may lead to.

In the end, family issues prevented Phil from actually swimming the mine himself, but that was OK; Edwyn and I were around, and I had swam it before. And I had forgotten where we had entered and exited the mine, but Phil did have time and energy to guide us to the entrance.

I drove to Edwyn, got a cup of coffee, and then we drove to the lakeside cafe to meet the others. Paul, his wife and dog, and another Derbyshire caver were already there. And then Phil appeared too. We went for another hot drink in the cafe and then we were off. To my surprise, the divers changed into their wetsuits at the parking space. It's quite a hike up the hill! And it was August! Edwyn and I carried ours. The other caver didn't have one, so he probably shouldn't get into the water at all.

We walked up, and soon Paul stripped to the waist. His wife informed me she now understood why I was carrying and not wearing the suit. But we got there! Phil had said the entrance was at the bottom of the first incline, but there was no sign of it; some scouting by Edwyn revealed it was at the bottom of the second incline. Good job Phil! But we got away with it. I started to change into an exhaustive layer of neoprene. This place is cold!

Edwyn saw the neoprene build-up I was working on and decided he might have to bail out. He only has what you could call neoprene dungarees; not enough for this place! So the two divers and I went in. We swam the first chamber, and shone our torches in the next. Didn't look diveable. We swam across and repeated the exercise. Same! We then swam one more and reached the end. Hm! Where was this alleged incline? But we admired the hobnailed bootprints. And swam back. From the other side of the third chamber, suddenly an onward passage came into view. Aha! That must have been our goal. But the divers realized it wouldn't be easy to get the kit to that place. They already struggled to get out of the water without kit! But at least they now know where it is, and what it looks like, and they can make an informed judgement on whether it's worth the effort. And I had had a nice Sunday swim! 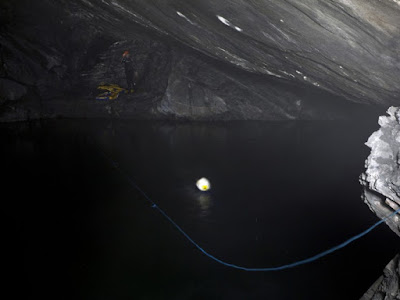 On the way back we could have stopped at the chamber with the artifacts, but we didn't; the divers had left their dog in the car and didn't want to leave him there for too long. And we were all getting cold. Especially the divers, as I was wearing neoprene gloves and a hood, and they weren't! So when we got out I went to my dry clothes immediately to change. Nice and snug! I also fancied a cuppa so I went out with Edwyn while the divers took some pictures of the first chamber.

After we had all come out and gone back to the cars we discussed the matter a bit, but bot Edwyn and I had stuff to do, so we wished the Derbyshire folk all the best and left. At his place more coffee followed and then it was time to go home and do things such as writing this blog post. I'll keep an eye on the forum to see if our guests will try to indeed dive this place!
Posted by Margot at 08:54