My father and his wife have left the building. They have been here for a week. A long time! But they are on their way hoime now. It has been a good visit!

The first day we walked around where I live. It was nice weather and they apporeciated the varied lanscape with copses, rolling hills, grazing sheep, and not-so-pretty villages. And the two magnificent bridges! But I see that environment every day and even though it wa sonly the first day, I got restless. The next day I dropped them off in Pentraeth, upon which they walked back, but I went to the office. Stuff to do! And I am spoiled; I can't be asked spending an entire day walking in a environment that for me is that common. A good day was had by all! When I came home with the shopping on my back they were sitting in the garden, in the sun, with a bottle of wine open and a glass for me already waiting.

For the next day I proposed a walk near Beddgelert; I drive past there an awful lot, always notice how beautiful it is, and never actually going there, so I thought this would be the day to do something about it. And we did! The weather was nice, and we started a nice walk along the river. We then turned inland in a nice narrow valley, with an amazing aerial ropeway still partially in it. It had been a copper mining area. It was great! 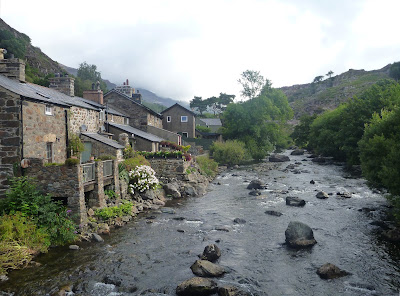 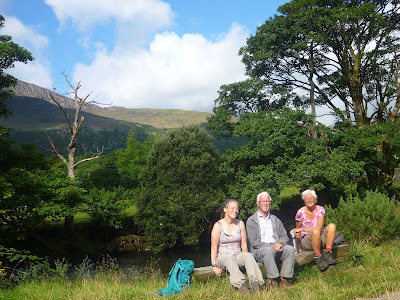 Coffee at the riverbank 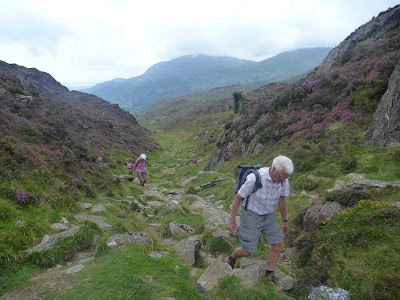 Approaching the top of the walk

On the other side we walked down to Llyn Dinas. There Joke wanted to go for a swim. A great idea! The water was lovely. We had considered adding an extra loop to our walk, but we also wanted to go for ice cream in Beddgelert too, and be home in time for a shower, grocery shopping and getting to the Bridge Inn in time for dinner, so we canned that. And did what we had intended! Of course we also popped by the station of the Welsh Highland railway. He loves his trains, and this railway had been reinstated so recent that he hadn't seen it in action. But no train came... and one had passed us on the way but due to it being on a bank steeply above us we had barely seen more than its steam. Oh dear!

We drove home via the other way, so they had seen Peris Pass too. And the food in the pub was great!

The next day we would set off on a two day hike. The idea had been a three day one, but most accommodation in Snowdonia was fully booked by now. Wim and Joke had struggled to plan a route without having been to this area before, and I did not want to make presumptions on what level of difficulty they would want their hikes to have, or what level of comfort they wanted for their overnight stays. We would sort it out in my kitchen. Possibilities were limited; we found a bunkhouse in Penmachno, which I thought was spiffing, because I know that valley is beautiful. We didn't find much else, so it would be a two day walk. We decided we would drive to Blaenau Ffestiniog, drop the car, walk to Penmachno, sleep there, and the next day walk to either Dolwyddelan or Roman Bridge and take the train from there. So we set off!

It wasn't such good weather, and we struggled a bit to find the start of the path. It hadn't clicked with me it was the same path we would use to get to some of our mines. It was nice to do it in hiking clothes this time! It was a bit windy, cold and damp, but not too bad, and the landscape looked good under the circumstances. 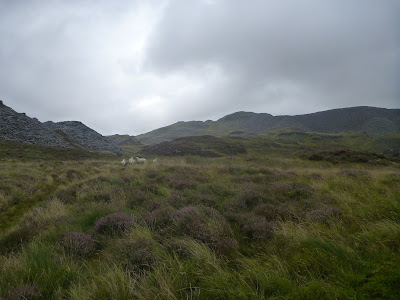 The grim landscpae above Blaenau Ffestiniog

We walked up the slope until we reached the old tramway going east; we would follow it all the way to Rhiwbach mine. The walking was flat and the route very clear, but the track was a veritable swamp and we had to do all sorts of antics to not swamp our boots. We had lunch in what probably had been the sawing mill of Rhiwbach. From there we walked through the wood, and tried to approach Penmachno via the SE flank of the valley. We abandoned that idea when the path on the map crossed the river on a dam, but the dam turning out to be breached. Forget it! We'll take the standard route. And then veer off to the left, approaching Penmachno from the NW. That worked well! The map was impeccable and at 5.30 or something we reached the lovely bunkhouse. 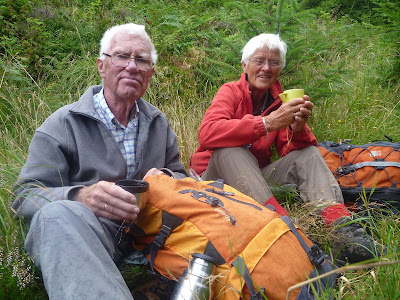 Cup of tea in the woods

We knew the bunkhouse did not serve foor that day, so we had brought ingredients for pasta, and a bottle of wine. We had a nice and calm evening there! And we had a room to ourselves. Wim and I had a walk on the village; that doesn't take much. It is a cute village but not very prosperous.

The next day we walked to Dolwyddelan. The route was clear, but the path very, very wet. It started with the occasional overtopped boot and ended with all of us eneding up with water up to all our calves. Not ideal! But what can one do. We were glad to reach the village. The sun also came out!

We knew a train would leave Roman Bridge at 17:12. But we were so ealry, we might be able to catch the earlier train of which we didn't know exactly when it would leave. We thought we'd see and hear the train coming from quite a distance. I didn't quite trust it, though, so when the station was near I started running to see what I could find out. A wise idea! The train spontaneously appeared out of nowhere and approached the station at full speed. The driver saw me, though, and slammed the brakes. We got it! That was lucky! Soon we were back at the car. We went for a coffee in Betws-y-Coed and then went home. 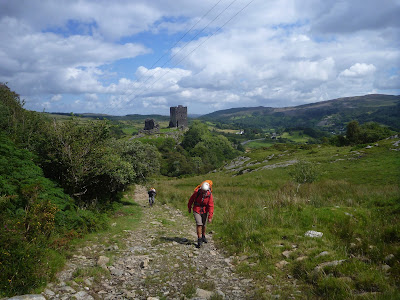 Walking up the hill past Dolwyddelan Castle

The next day we parted ways again; I went to the office (and had a very productive day!) while Wim and Joke walked back from Penmon. And then there was one day left; we did some Anglesey coastal path. We dropped the car at Traeth Bychan and walked along the coast to Traeth Dulas. We then went inland to Mynydd Bodafon, from which we intended to walk to Din Lligwy. That went terribly wrong, though! We had to walk a short distance along the main road and turn off on a forest track. I went ahead; after a while I came to a locked gate. Would this be our turn? I decided to go for a leak while Wim (who had the map) approached. He shot past, so I figured this wasn't it. When I caught up with him it turned out he had just walked past without checking. Oh dear! It had been our turn. But by this time, Joke was far ahead, out of earshot. We had little choice but to just continue along this very unpleasant road. It was raining too! An unpleasant end of our last walk. We went back to the car via the shortest route. We had walked 6 km on uninterrupted asphalt of which half along the busy road. Not good!

We went home, had a shower, and ended the trip in the Anglesey Arms for dinner. The visit was coming to an end! The next morning I just went to work after breakfast. As the next guest might arrive the very same day Wim and Joke offered to tidy up the house, after which they would first explore Bangor and then Manchester. And then go home! End of a long visit.

I noticed I struggle a bit to not be a one person household; normally, everything goes exactly my way, all is exactly where I put it, all rooms are at my disposal at all times, etcetera. But I managed! And they are very good guests.

I'll see them next time in the Netherlands. It was good to have some extended time together; when I am in the Netherlands there are always so many people to see I feel I am short-changing absolutely everybody. But they came here to only see me. And they did!