The week is for calm and responsible behaviour; the weekend is for silly exploits. In several ways! This holds for running, for instance. During the week I do modest pre-lunch runs; if I'm lucky I have a colleague  (or two) accompany me, but more often I'm alone. And lately I've been running with Neil in the weekends. And that's always wilder.

A week ago we went running on Harrowbeer Airfield; I forgot my camera and Neil didn't take any pictures either, so that didn't end up on the blog, but it was a splendid run. Harrowbeer was only in use in WWII, and is now a field with only the foundations of structures left, and grass on the runways, and only earthen walls around the perimeter still rising up. The combination of the running off-road, the view, and Neil pointing out every relic slab of concrete and knowing exactly what it was for, was rather splendid. And the earthen walls were good for running up and down over them like a bunch of kids!

When we decided to do another run this week I suggested we run around some more interesting industrial heritage, and Neil immediately warmed to the idea. He came up with a run along a bunch of Dartmoor quarries. I looked up the route on Google maps and was quite impressed: they are beautiful! And I noticed the route would take us over the abandoned Princetown Railway, which I had encountered a month earlier. 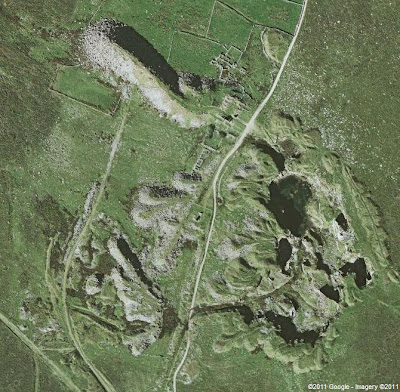 One of the quarries on route as seen by Google Maps
On a day with beautiful menacing skies we set off. It is a marvellous route indeed! And the quarries were very impressive. The first one we just ran past, and I marvelled at the scale of the waste tips. When we approached the second, and the proposed route went straight ahead, Neil started to look difficult, run circles, and then say "f##k it; lets go this way", and ran into the path leading to the actual quarry. It seemed to be the quarry from which the rock for Nelson's column had been taken. We ran to the edge of it, which was very scenic, and then spent some time running around the remnants of buildings and whatever else there was to see. Beautiful! It did mean, though, that our route would be longer, and at some point I got tired and fell behind. But when we reached the top of the hill I was fine again. 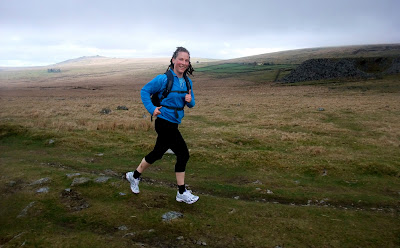 Going strong! The tip in the background is, by the way, the biggest tip on the aerial picture above.

The inside of that same quarry 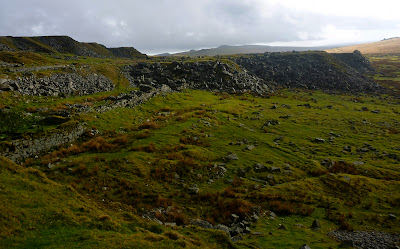 The quarry again; now seen from the afore mentioned tip 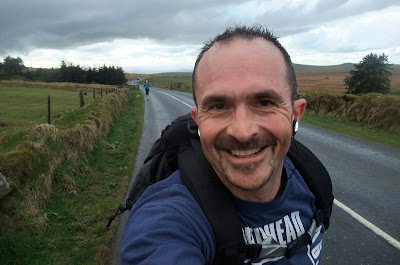 Neil going strong while I lag behind

We ran through Princetown, past the famous prison, past the church with the unmarked graves of French prisoners of war, past where the railway station had been, and then we were back on the old railroad. And on the way back we got some actual sunshine! 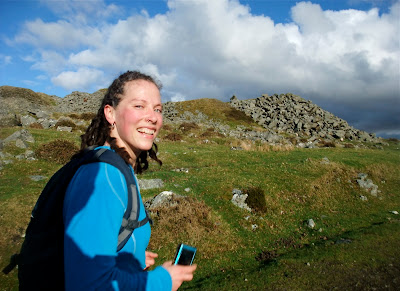 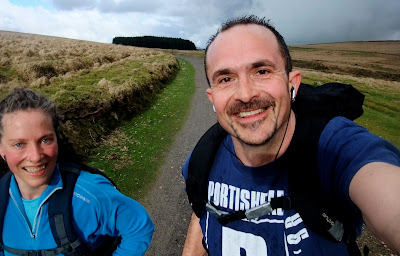 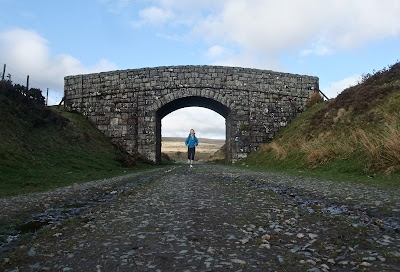 A bridge to nowhere, as you get at abandoned railway tracks
We ended the trip in the quarry that I had explored the previous time, and where I had been wondering about circular features. Neil looked at them, and recognised them as foundations for cranes. Learned something again!
Here we decided to stop and use the rest of the path as a cooling down. Neil had participated in a social gathering the night before, and the effects were taking their toll. When the nature of the event had been described to me I was quite impressed he had managed to run at all; let alone 18.4 km on a rough track. 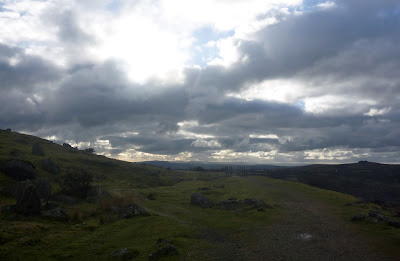 Dramatic skies over our cool-down
After the run we had a good meal involving quite some fish (another budding tradition), and exchanged pictures. A splendid afternoon plus evening! If it's up to me this tradition will consolidate...
Posted by Margot at 18:43