Two things happened here in the UK in close succession and they didn't combine well. A woman was abducted and murdered (and probably raped in between), and the suspect was a serving police officer. The other thing was that a new bill was proposed, which curtailed the right to protest.

After the murder, a lot of people (mostly women) wanted to protest against not feeling safe on the streets. Large gatherings, of course, are not legal at the moment though. One could have imagined they would have exercise discretion and let the protests happen, but that was not how things panned out; the papers were full of pictures of police officers manhandling and handcuffing women. And I think a lot of people were angry about the proposed bill anyway, but having seen a legitimate protest so ham-fistedly dealt with probably stoked that anger.

On Friday, I saw something about a demonstration in Bangor against both this bill and violence against women. And I thought that was a worthy course. I didn't think I could go though; there was an Open Day on. These come in two sessions; one before lunch and one after lunch. During the one before lunch we were told applicant numbers were such we were not all needed. I was free to go! So I had lunch, tried to find the details about this demo, and failed completely. I decided to go anyway. If I had misremembered and there was nothing on, I would just turn around and bike back. That way I would have got my exercise!

I was a little bit late but I saw that there indeed was a demonstration on, on a field right by the main campus. When I parked my bike everyone just left. The second half of the demonstration would be on the nearby field, where people could lay flowers by a tree in the honour of the murdered woman.

There were a few speeches, and people attached placards to a nearby fence. And then it was already over. I didn't linger; I mean, everyone was wearing a mask, and you weren't allowed within 2 m of anyone else. So mingling was not really an option!

All in all I think I was there only for about half an hour. And I think there were less than a hundred people demonstrating. But few people is better than no people at all! I am glad I went. Sometimes you just have to show up to show you care. And we were seen; there are several cars driving fast and honking. I don't think this bill is very popular in Wales. I looked it up, and only Tories voted for it. This area is not very Tory dominated!

Did we make a big difference? I don't think so. But I do think it mattered; the people who worry about this have seen that there are more people worrying about this. I know exactly what it feels like if you are upset about women being treated like consumer goods that can be applied to cater for men's sexual gratification, and being the only one to feel like that. Feeling you are not alone helps! And gives you faith to keep the fight going. So I was doing that. And that is already something. 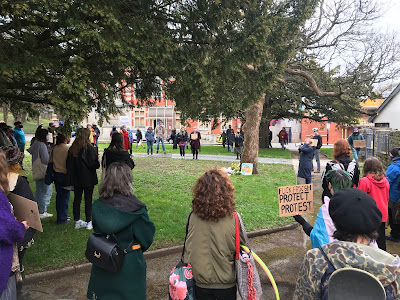