I suppose the big difference with the previous time is that a lot of questions come with the disclaimer "your situation might have changed due to Covid, but answer the question reflecting your current situation". And I did! I pointed out that I work at home these days. Many people will, I'm sure.

Another thing that changed was that I now live in Wales, so I get asked specifically how my Welsh is. Unsurprisingly, you don't get that question in England. I will now show up in the census as a Welsh speaker!

I suppose my situation has improved a lot in between. Back then I was living in a one-bedroom apartment that I had chosen in a hurry, in which I would not have chosen if I would have known what I got myself into. Now I am living in a beautiful house I bought and which I enjoy every day! And instead of an unpleasant neighbour (who might not yet have been unpleasant in 2011) I now have a very nice neighbour with a charming dog who wants to lick my nose. (The dog, that is; I have not noticed such desires in the neighbour.) And I suppose I still don't live in a particularly beautiful neighbourhood, but this time it only takes me about 20 minutes on foot to be in the equivalent of Dartmoor. And that more than makes up for it!

Would I still be living here for the 2031 census? Time will tell! 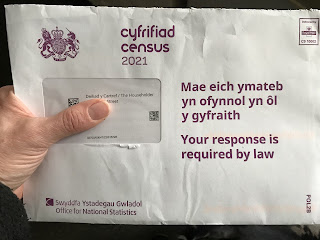