I think I should have less stuff. Stuff gets in the way. Stuff makes moving house a pain in the neck. Stuff needs space. I have a lot of stuff I don't use. There seems to be a good solution: get rid of it. But it's hard! For me, at least.

I am perennially afraid that if I get rid of stuff now, I will have a use for it later. I held on to my climbing kit, for instance, when I left Norway. In Plymouth I climbed three times (here, here and here), and in York I didn't climb at all. But now I'm back at it and very glad I still have the stuff! I also kept my skiing trousers; generally too hot for the temperate UK climate. But one pair of trousers lives in my office and comes out on winter Monday mornings; the heating is off over the weekend, and quite often it will be Wednesday before the temperature is such that wearing only one pair of trousers is comfortable. The other one is in use for climbing on cold days. So hanging on to them paid off! See what I mean? It's hard.

When I got rid of the broken hoover I went to the recycling centre, bringing along some other stuff, and it reminded me of how nice it is to get rid of stuff. And then I realised my bicycle key was about to break off, and I wasn't sure if I had a spare. If I did I'd better get it out soon! But where would it be? And then there appeared a weekend in which I wasn't feeling too great so pottering around in the house seemed a good idea. And thus it started. 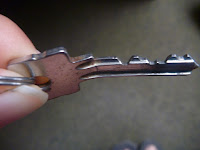 Looking through different places where my spare key might be, I ended up sifting through some stuff I had been intending to sift through before, but never got around to. Now I did! And quite some of it could go. A big garbage bag filled up. It felt good! And I didn't find a spare key (I think I have none) but I did reunite a few rogue locks with their spare keys, and chucked the rest away. Success! 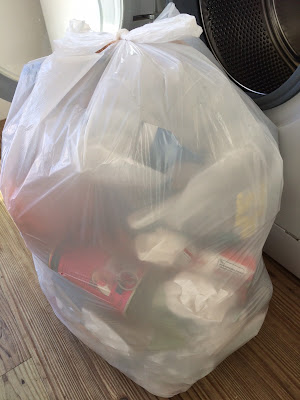 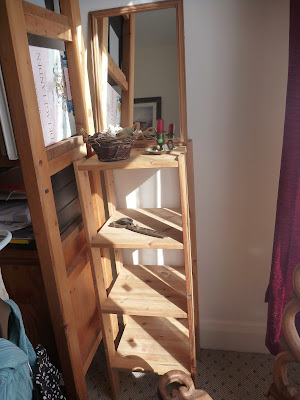 Entire shelvy thing empty! Except for some tasteful decoration.

One other thing I had been working on earlier, with insufficient progress, was scanning photo albums. I had done quite some scanning, but hadn't had the heart so far to actually get rid of the original albums. And that had been what it was all about! So since I had started scanning I had diligently moved all the heavy albums to the other side of the country twice. Not good! So as I was on it anyway now, I decided to make some progress. One album had been scanned but only partly edited and turned into PDF; I sorted that. And scanned and edited another. And this time I did an actual selection of which pics could go. My albums stopped at 2004; after that, I kept my files digital. But in the period 2000-2004 I clearly had a digital camera but still printed everything off. That had resulted in an overabundance of pics; in digital form, I keep them all, but now I only keep the valuable ones in analogue form. That way I managed to compress four albums into one! Now we're talking! 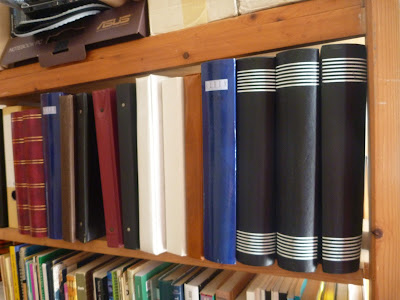 Fourteen albums (the fifteenth is awaiting scanning elsewhere); of these fourteen, nine have been scanned! Soon this row will be a lot smaller and lighter...

I will have to keep this up; six albums still to scan. And then I have an entire drawer full of loose pics. Best to scan these too! And then I should be careful with the PDFs. I'll see if I can dedicate two separate carriers to them, and keep them in two places. And then soon I not only have made space, but also made a backup of irreplacable old pics! That always is a good thing...