I had spent my 39th birthday in an obscure little mine; it was one we had explored from the bottom up. We had come to a ladder which gave access to another ladder which had a decided lack of rungs; David added a few more. Then we had come to a timbered winze one of the men had free-climbed, which we later rigged. Then we may-poled our way op another winze, then climbed a chain, then maypoled up another hole, in order to come up into a somewhat larger chamber, which turned out to have an adit of its own. We had a round trip! But something went up higher than that, and we pushed the maypole to its limits (and ourselves too) to see where that went. And we had found a choked passage; we spent my birthday trying to dig it. We had removed a lot of rubble, but there was more; we thought we'd leave it for a bit; more would come down. If we would just ocme ack once in a while to dig again, then sooner or later the passgae would run out of rubble and we might find a passage up! So eighteen months had passed and now we would go back.

We got kitted. David was keen to go straight to the top to look at the choke. Most others were keen on efficiency so chose to join him. I liked the way up so I wanted to go in from the bottom. Edwyn had not been here so he decided to go in at the bottom too. He had the alterior mortive of gentlemanly looking after me; he knew we didn't know what the state of the various ropes would be and wasn't keen to let me negotiate them on my own. Paul didn't like the mine at all so he went for a walk. So we split in three!

Edwyn and I had fun climbing up.When we got to the final ascent we heard voices. We found the others (minus Jay, who didn't like the cold wet entrance, and had set off on a walk too) who were considering the rope up to the next level. It looked frayed! Oh dear. Phil decided against, but if we didn't use this rope we couldn't go. I was the lightest of the lot so I decided to climb the rope anyway, frayed or not frayed. And having come to the top I turned the rope around. The next one could come up! I then tried the next rope up; that was in excellent condition. But the choke looked again like it had done the previous time we had found it. I figured there was no end of rubble to refill it. I had had my fun digging that! 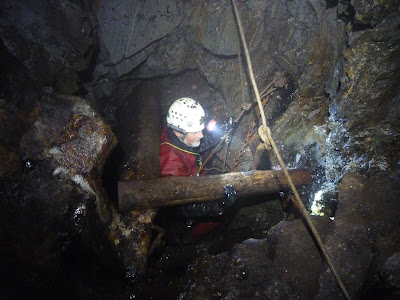 Edwyn coming up the timbered winze 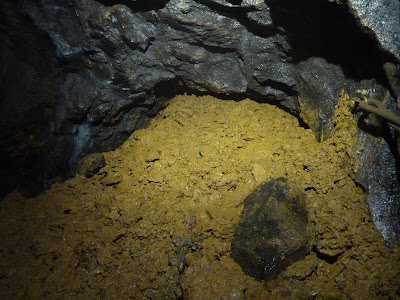 The choke
While I was there, Phil came up. He was keen on some digging! Then Edwyn, who had not seen the choke before, ascended too. There is only limited space up there so I decided to go down. I went one level down, but there is limited space there too, and the men at the top were about to chuck a heck of a lot of stuff down. I went down all the way! Richard did too. 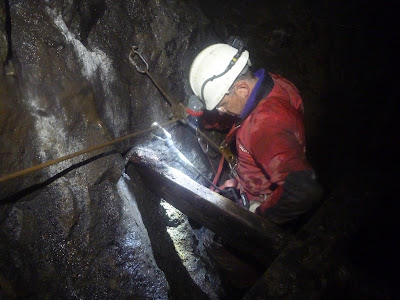 Phil comes up to the top

The men got carried away. Rich and I could do little more than watch. I could of course go back down again and then back up to keep myself warm and entertained, but that seemed a bit silly. I also considered going out, but the water in the exit adit was reported to be waist-deep, so that would not make me warm at all. So we just stood and watched.

After a while I was getting too cold. In summer I don't wear my inch-thick furry suit; that's too warm, but then I wear separate long johns and thermal shirts, and these hike up in the suit. Uncomfortable! And cold. I had been looking for a thinner undersuit for a while but so far not success. Anyway; I was cold, and the men seemed to have stopped, so I wanted to go somewhere, do something. Richard was complaining about rib pain, so I figured he should perhaps not go down the way I had come in, but he was considering it anyway. I figured we could then go down already; me to warm up and keep an eye on him, and him seeing how he liked it. If we left now we could go back up if he didn't fancy any of the pitches or ladders with his allegedly painful ribs. He's not a great fan of ladders on the best of days.

I happy to stride out at speed and re-emerge into the warm evening air. In a bit I was back in dry clothes and all was well again. Jay and Edwyn were already back at the cars, Paul arrived well-timed from his walk, and then the other men appeared too. We made plans for the next week and then we were ready to leave. We would be home before midnight! Good, as I would have to finish a cake the next morning. A good night out! Will I be back there again? I hope so!
Posted by Margot at 09:22