Our new building, which was to house the Marine Centre Wales, building had been in use for some six months, but it hadn't been officially opened. (On its own website it says the building is due for completion in early 2015 - har har!) It had been clear for a while some high-ranking person would do the honours; the old building was painted, its fence was too, all dead grass was hidden underneath slate chippings, and so on. And our windows were washed! Jaco, who has been here a lot longer than me, confirmed that hadn't happened in at least nine years. They are translucent now! That's great.

On the day of the official opening I had more important things to do: bring my sister to the railway station. When I had done that I went back to my office. In the new building, the ceremony was underway. At some point I heard applause, and when I looked out of the window. I saw Prince Charles walk out of the building and into a limousine. Job done! So now the building is officially open. And it looks great, but I'm afraid it won't last; the entrance had been festooned with lovely plants, but it was very clear they wouldn't stay. They have to be back on the mainland for the graduation ceremony only a week later. Oh well! The paint on the old building will stay, and my window will remain relatively clean for years!

And the people in the new building? Well, they are all part of SEACAMS, which is, eh, funded by the Welsh European Funding office.Its building was opened a week after the UK voted to withdraw from the political unity that funds it. That does not bode very well for its future. Maybe if they would have managed to get it opened on time it would have had a few years of service before this bomb was dropped... 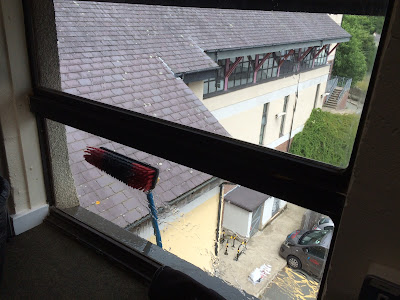 My office window is being cleaned! 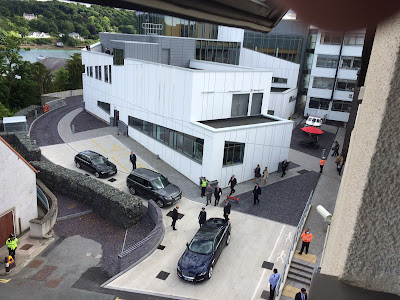 Prince Charles has left the building 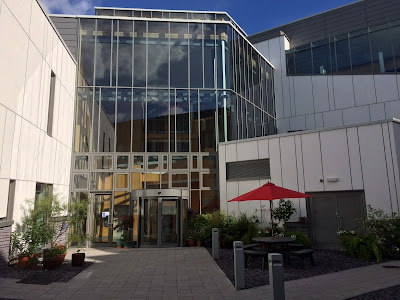 The entrance of the new building looks fab! 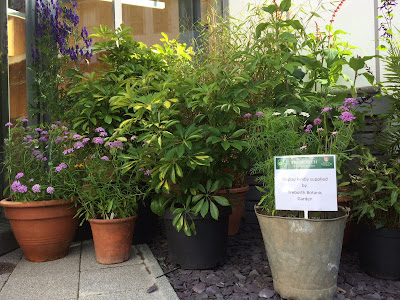