Just over a year ago, we had explored a mine in which we saw a bolted drop. It was too late in the evening to explore it but we wanted to do it some other time. That time was now! I looked forward to it; new terrain, and rope work! My favourites.

Without issues we got to the meeting point. We were with only five! A nice little group. We went in and started rigging. I was th efirst to go down. It went to a small level that looked dead, and then went further down to the top of a rise, with planks over the top. You could go down that rise, clearly, but I wasn't sure if it would go. I thought it'd be a bit selfish to explore all the way down on my own so I stopped at the rise. Soon Phil was down too. Then David. He decided to go all the way down. When he was there I asked if there was space for two; hwe answered there was space for evrybody! So I followed. We all did except Paul who did not fancy any rope work today. 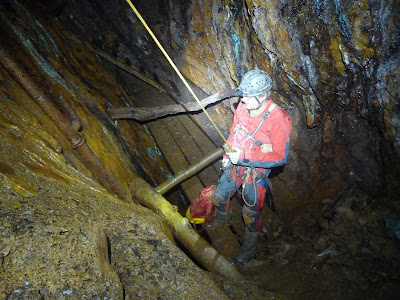 David on top of the rise

We soon saw that only one tunnel went a fair distance; Phil and I also found out the water in it got deeper and deeper. We decided to go back and wait for the rest; it would be more efficient to go in all together. In the end it was only me who scouted it out (surprise); the water came to my chest but at least I knew for sure what was at the end. A blockage! Another surprise.

Having figured that out we were ready to go up again. Phil had started; I wanted to be next as I was the wettest. I went to the intermediate level I had seen on the way; that would give me time to explore it while the next person came up. That was Rich; he had made an unwise change to his SRT kit, and already at the top of the pitch we had told him it was as unwise as it was, and David had offered him a sling which would remediate the situation. Rich stubbornly decided, however, to climb up to the next level without the sling. That left Phil and me to wait a considerable time, listening to the sounds of discomfort emanating from the rise. Oh dear! Luckily he saw the error of his ways and deployed the sling for the second part of the pitch; otherwise we would still be there. 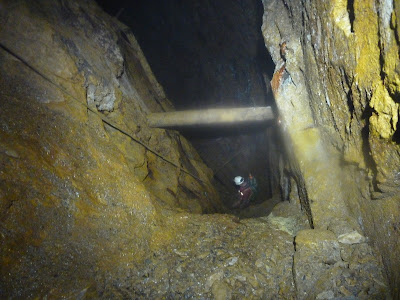 Phil on top of the rise 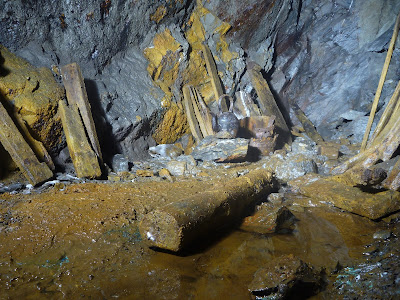 A kettle and a bucket

With Rich up to the next level I went all the way up. I took off the SRT kit and had a look at the rest of the mine. I had seen it before, but it was nice to see it again. I don't always have an acute memory of such places! On the way back I bumped into Phil and Paul. When we got back Rich appeared, followed by David; we could de-rig. While David, Phil and I did that Paul and Rich vanished so Paul could show the latter what he hadn't yet seen; they wouldn't be gone long and they knew where we would have gone to so we went out. It was nice and early!

We had a half-hearted attempt at locating where the blocked adit would have come out, but then we went back to the cars. I was fully changed by 10PM! Brilliant! I left on my own; David had not come from work so had travelled on his own, and he inteneded to go and get a bite to eat on the way back. That drew in crowds so all the men from my car joined him. I was home by 11PM and lights were out before midnight! Great! Chest-deep water, rope work, artifacts and home early; mine trips would struggle to get better...