My previous post on MATLAB was called "MATLAB success"; it sounded like it was all done. But I explained in the post I hoped to do an extra part of the assignment in MATLAB. I had no idea how, though! But when I went to Laugharne I hitched a ride with a bloke called Connor, who turned out to be a complete MATLAB nut. He proclaimed to be willing to help me with it! And he did.

I told him what I would ask of the students. He then sorted something out on his own, and showed me what he had. Then came the task of A) making sure I could do the same analysis with this year's data, and B) figuring out how I would get the students to use the scripts in the way I wanted them to without either leaving too much up to their imagination or railroading them too much. The first task is done; I managed to emulate his work. Now I only have to nail the second part, and then I can compile everything, write the assignment, teach James to do it (he's my guinea pig), and finalise the introductory lecture! And then I'm laughing! Let's just hope the students are good at it and enjoy it too... 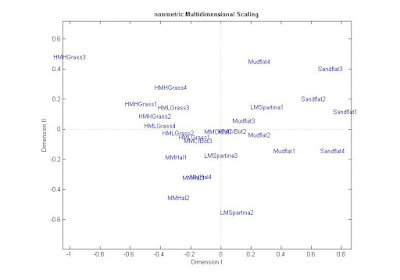 Not quite what it should look like (the labels are too long) but the concept clearly works!
Posted by Margot at 09:06