In summer there are always Welsh Summer Schools, and these come with public events. Last year I had joined the Welsh pub quiz. This year I had my sister over which prevented me from several of these activities, but the day she left there was a concert by two Welsh-learner choirs (and two soloists). Marjan was on in of the choirs, so together with Jaco I went to the concert. And it was good! Amateur choirs can sometimes be rather uninspiring but this one surely wasn't. And it was nice to see my Welsh teacher Elwyn in action asd the conductor! And another Welsh tutor, Bethan, on piano. And two ladies from my class were in Marjan's choir too.

As this was a rather Welsh event (with Welsh language and the rather Welsh activity of singing) so it resembled an Eisteddfod. And at an Eisteddfod you sing the national anthem at the end. And blimey one did! I was a bit embarrassed when Elwyn made the entire audience (and the room was full to the brim; they had had to turn people away at the door) stand up for the singing, and pretty much everyone seemed to know the song. But I don't! I can do the words but I don't know the melody. And even if I would I would struggle. I can't get "happy birthday" out in any acceptable fashion. Oh well! Nobody seemed to mind I kept my  mouth shut. If I would end up living here on intermediate timescales I'll practice a bit! It seems to be part of the package. Cymru am byth! 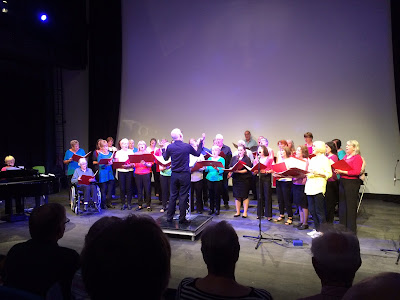