Plan A was: bring my bike on the train to York. Bike to the village Antony lives in, which takes an estimated 1.5 hours (no buses on a Sunday!), and then bike back the next day. Use the bike to get from viewing to viewing, and then park it up somewhere and take the bus back to Antony's. And then do as many trips up and down as it takes until I secure myself a place to live! But then I came down with a cold. So plan B was devised: bring my bike on the train to York, park it up at the railway station, be picked up by Antony who was in town anyway, and, I thought, go to Antony's.Then take the bus to town the next day and continue as in plan A. There turned out to be a plan C!

I could have known: Antony is both very keen to help out and very nosy, so when I got into the car he suggested we'd drive past the houses I had planned viewings for. What a good idea! So we drove to the place that had two bedrooms AND was really close to the railway station and the railway museum. It didn't look bad at all! Then we drove to the village green of a suburb. The location of this apartment was enchanting! But there was a bulldozer parked behind it - was there construction work going on right behind the place? Then we went to a flat in another suburb; neither of us liked it. And with some effort we found the last feasible one (we skipped the downtown one - not a good one in a car during rush hour), which was really close to university, and had lots of low-maintenance garden space around it, but which looked not very well-maintained. And then we were off!

During the trip to the village I noticed I was already dreaming of life on the village green. I really warmed to the place! And it would be my first viewing the next day - maybe that would just settle it. We discussed things in Antony's local over a pint, and then it was time for dinner. I was really lucky to spend the stressful time of finding a place in such a nice household - Antony's wife is really lovely too, and where they live might not be the most logistically straightforward place, but it's a beautiful house in the cutest of villages (and if it would be easy to get there, maybe it would have become slightly less cute). 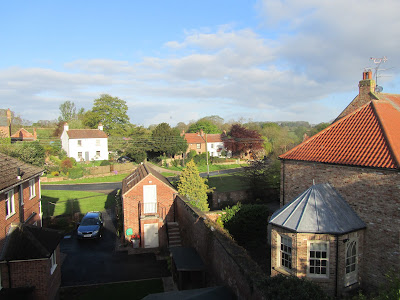 This is the view that would greet me in the morning

The next day I got into the bus, found my bike, and set off to tourist information to buy me a map. I had been offered Antony's, of course, but I know what my Plymouth map looks like by now, and I was keen to get my own. At the tourist information I also checked my phone; I intended to call off the viewing of the place we hadn't liked. I saw I had a voicemail. It was the agency letting out the house on the Green! They cancelled, as someone else had taken it! That was sad. I decided not to call off the viewing I had planned to cancel; this could happen to any one of the properties on my list! Best to keep your options open. I used the time freed by the cancelled viewing to bike to the place I would view the next day, and from there to university, to get an idea of the commute. It was very nice! 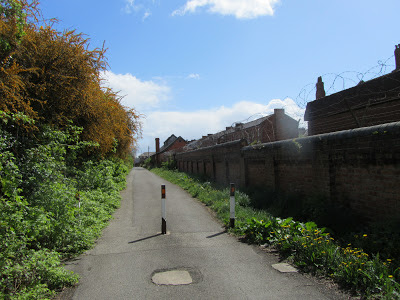 If you approach the university from the west, you travel over a cycle path between barracks

The impopular place was next. I still didn't like it! Then I had a viewing in town. The apartment was beautiful! Much better that I'd expected. There had only been one picture on the website, and it didn't show much, which doesn't inspire much faith. But it was in a very good state, the rooms were huge and light, and one had a view on Micklegate from it. But where to put your bikes? Access to the apartment was through a maze of immaculately white staircases and corridors. I liked it, but if my bike doesn't like it too, then the deal is more or less off. I've spent four years dragging my bikes up and down stairs, and even if I might not mind that too much; the staircase might, if it would be capable of having opinions. 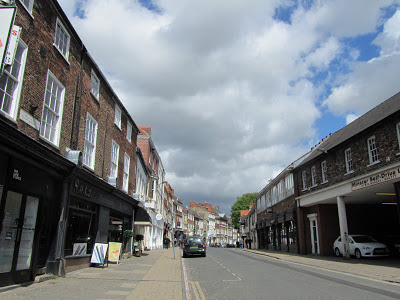 Micklegate - the street I decided against, on transport grounds

The next one was the place that had two bedrooms AND was really close to the railway station. I had time to first explore the surroundings on bike; I got there over a scenic bicycle path along the river. So far so good! But when I checked the green space beyond the house that had looked so attractive on Google Maps I was in for a surprise: it had become a building site! They were making some flood defenses. And I think flood defenses are a good thing, but in this case they do mean I'm not allowed access to an area I would like to go running in. Bummer! 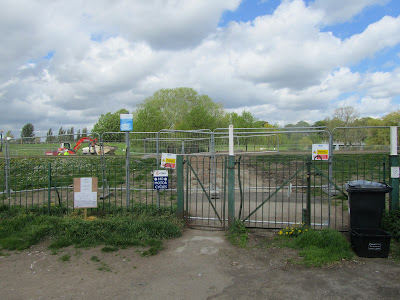 This should have been running area!

Then the actual viewing started. I had expected it to be really small, but to my astonishment I walked into a good size living room, with a good size dining room behind it, and a small enclosed courtyard. And two spacious bedrooms upstairs! I was quite impressed. And with the house on the green gone, I was a feeling the metaphorical breath of fellow house-seekers in my neck. And seeing the head of another viewer appear behind the window didn't help to shake that off.

When he came out we had a small chat. He liked it too! I admitted considering racing him to the offices of the estate agents. He said he didn't want to decide until he'd have seen some more properties. He was interested in the one on the Green as well, and was sad to hear it was gone already. They hadn't phoned him yet... we were clearly fishing in the same pond. 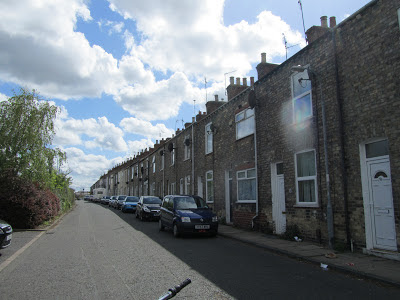 The street near the station with the 2 bed terraced house

I went to town. I was hungry. I chose a pub near the offices of the letting agency to eat something, and to consider my options. I had another viewing at 16:45! Should I go? If I went and didn't like it, I would be too late to put dibs on the house I was considering. And the next day I couldn't be in town before 9:30, because of the bus. If I went, I might lose the house! Should I risk it? Should I? Then the phone rang.

It was Roland. He asked me where I was. I said Walmsgate. He said he was too! I stepped out of the pub and waved him in. He joined me. I was a little apprehensive; in his last months his mood hadn't been particularly good. Check the pictures of the Sussex fieldwork, for instance; the only ones in which he smiles are posed. But in walked a changed man: all relaxed smiles. I hope he keeps that up in his new hometown! I told him of my dilemma. And I don't like such decisions. What to do? Risk it? Play safe?

I decided I'd play safe. Still staggering with the burden of decision I left Roland with his pint, and went to the letting agency. There I offered them the £100 that would keep any rivals out, and received the forms I was expected to fill out. The dice had been cast! I was going to live in a 2 bedroom terraced house! I would, for the first time, have space for a dinner table. I would have a guestroom; I am curious how many people will be interested in using it. And I will have a courtyard for sitting in the sun and repairing my bikes and rinsing my caving kit and whatnot. Exciting! The letting agency is now checking my credentials. I hope they get back to me soon, and confirm all is well. One thing that may go wrong is that they can't confirm my employment. I still haven't seen a contract, and when I phoned the university to inquire, I got put through to some three different people without any of them being able to dig out any sign of the university being aware of my existence. They should get their act together fairly soon now! But I went back to Antony's to spread the news. One of the main hurdles is taken now. York, here I come!
Posted by Margot at 09:33

Dibs on the guest room!