This mine shaft had eluded us three times. Would we finally get down into it? If we would, then surely not without some difficulty!

The adit of South Bedford leads to a shaft. On the other side the tunnel continues. We had spent one trip concluding that. One trip figuring out if there was an entrance to a lower level. One trip dropping in from the top, and exploring the tunnel on the far side of the shaft. And the day had come when the usual suspects Dave, Lionel, Rick and I would drop the actual shaft.

I was on my way home when Lionel phoned. Dave wouldn't be coming; could I go and pick up some bolts? We'd need them! I could, but that would take up the time I had scheduled for eating. Oh well. Lionel would get me a sandwich...

I got the bolts. And even made it in time to the meeting point. So far so good. There I found Rick. He was in his pyjama bottoms, and looked miserable. He handed me his drill and proclaimed he would go straight back to bed. Oh dear! No Rick! And as well: no rope! I knew Lionel expected him to bring one. I hadn't brought mine either. I figured it wouldn't be long enough, anyway...

Then Lionel turned up. Without a rope! We decided to solve this by borrowing Rick's, so Lionel and I followed him home. There we got the orange rope, and a befitting hug from Rick's girlfriend, to congratulate me with my king. But then we were off. It would just be the two of us!

We got to the shaft without issues. Then we were faced with the task of drilling holes. Not easy; there was nowhere to stand comfortably while doing that. With a lot of effort, sweat, and discomfort Lionel managed a hole anyway. But when he put his weight on it, we saw it move. Not good! He had to drill another one. 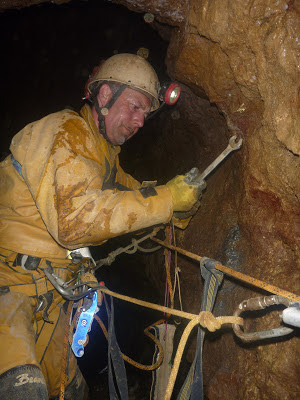 It was none by the time we had managed to rig this place. But better late than never! I was the first down. It was a nice shaft, but only a shaft. No levels going off in any direction! After a while I could see the garbage that was filling it up. We wouldn't be able to go further. So nothing down there. I did want to go all the way down, though. 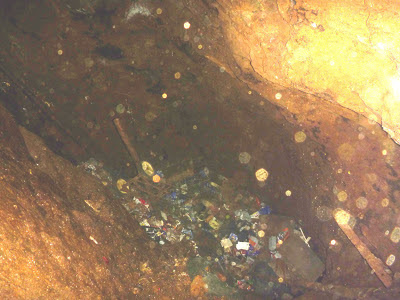 The garbage filling up the shaft


And then I saw it. A level, after all! I shouted to Lionel, and swung in. Exciting! In no time Lionel was there too. Time to explore!

The previous level had already been hardly ever visited, but judging by the pristine flowstone on the floor, and the stalactites and stalagmites almost blocking the way, this one had perhaps been visited even less. Maybe not at all since the mine closed. Beautiful! 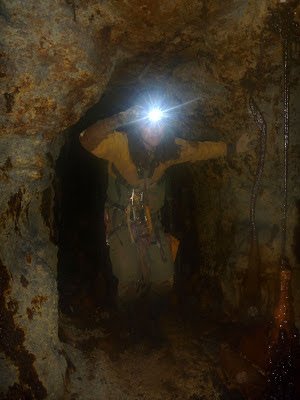 Me in the level 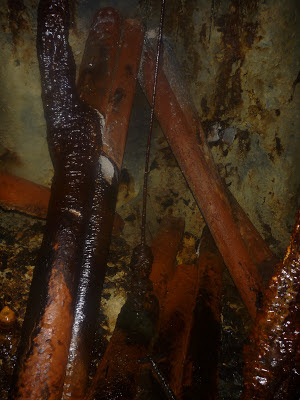 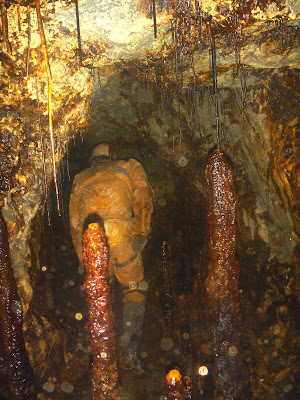 Lionel makes his way past the dripstone obstacles 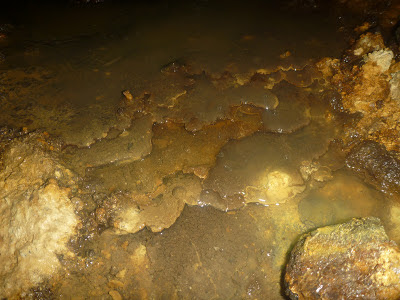 Flowstone on the floor: a sign of little disturbance 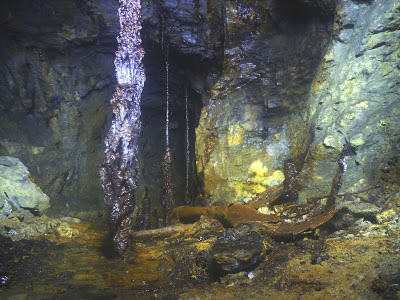 An especially decorative column next to some more piping 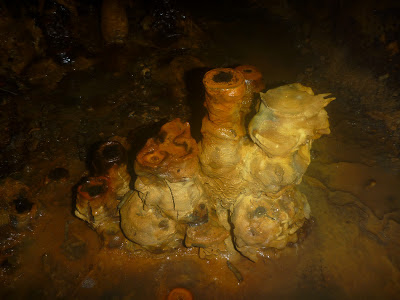 A pretty cluster of stalagmites 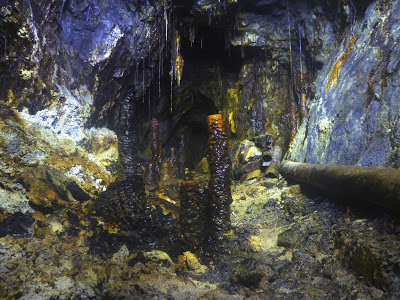 The colours in there were rather spectacular in general

There wasn't much archaeology; we found a hammer, a pick-axe, and lots and lots of zinc air pipes. But not much more. And not much oxygen, either. We didn't dare linger! We did make sure to explore all apparent dead ends (they were actual dead ends, it turned out) and then we went back. Lionel went first, so I could still take some pictures. Another venue explored! And quite a special one as well...