How a boring mine can become interesting. Bedford Consols is on the club list as a novice trip. A walk in, some getting wet to above the knee, some walking past flooded winzes; some meters of crawling. All very civilized. But there was an ore chute in there somewhere. And one day I climbed it. I found a ladder up there! And the next time I went there, I made sure to climb not only the chute, but also the ladder. Very beautiful! And the ladder leads to a wooden floor I don't dare walk, so that's it, but when this mine was on the list again I was enthusiastic.

We had two new prospective members; a lady who had just moved to Plymouth from Portsmouth, and who was already a caver, and had now joined us; and the landlord of the pub we often visit after our trips. He had heard so many stories and seen so many pictures he had become curious, and wanted to have a look for himself! Both were, of course, very welcome.

We walked to the entrance. And in. Soon we reached the ladderway. I intended to wait for the rest, but that took too long, so I decided to go up the chute, in order to offer the caving lady some excitement. She looked too adventurous for a walk in and a walk out! 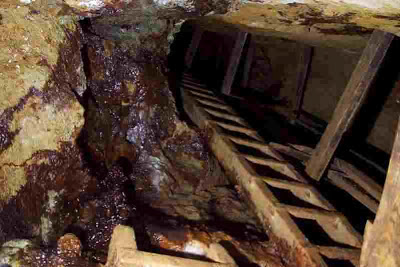 Looking up into the ladderway. Pic by Dave

She was a little uncertain to what extent she could trust the woodwork. Fortunately, it's rather solid in the place. So she came up! And then we climbed the ladder! We didn't go any further, and
when we heard voices below us we decided to come back down. By then, Richard, Alex and Rick had made it up the chute too. The former two had been there before, but Rick hadn't, and he was quite impressed by the stoping and the timbering. Then the three men decided to chance the ladder. It clearly suffered a bit from all that use, but all came up (and later down) safely. When Rick reached the upper level, he kept shouting "I've been herebefore!" It turned out he had dropped the shaft somewhere in the nineties. That might still be possible. And if we place enough bolts in the wall, we could even explore the whole level! Normally such thoughts make me glad, but now they make me nostalgic: I won't be there to help him do that. 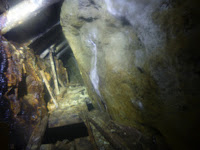 The level we didn't dare explore - the picture is a bit hazy, hence the small size 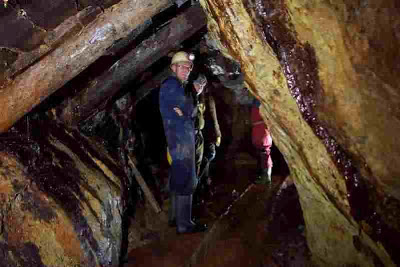 Landlord Greg and me in the level. Pic by Dave

We came out and had a pint in the Queen's Head, delivering Greg the landlord back. The countdown has begun. I probably am still in York, or on my way back, for the next trip. So that leaves a maximum of two Tuesday trips!