the Eve of York


Moving house is hard. You have to pack up a home while still living in it, you have to say goodbye to all your friends (if you move too far, that is, but that has been what I’ve done the past few times), and go somewhere else, where there is a lot of work to do, but you have no friends yet to share that work with. And if you move somewhere you know you’ll stay for a long while you know these friendships will build up, but when your future is uncertain from the outset, you know you’ll have to face that uncertainty alone. So one can probably imagine I had mixed feelings about my move to York. And of course my nearest colleagues are close, which is good, but one needs a few more friends than the people one works with. When I get there I will have only slightly more than a year left on my contract, and nobody knows what will happen next. So in a way, I can only lose; either I find another job before the current one runs out, and then I’ve moved house for living in York for less than a year, or I don’t find another job before the current one runs out, and then I will have to face unemployment in an expensive city where I have only a fledgling circle of friends. The only way this can turn out perfectly is if I find another job in or near York itself. What are the chances?

So why even go? Well, there are several reasons. York is closer to everything. So apart from the friends and house prices issue, York is a better place to look for a job in. And York is closer to Liverpool, where Hugh now lives. And equally close to an airport from which you can fly to Amsterdam, and closer to airports from which you can fly to Helsinki and Oslo. The Environment department in York seems to be a place on the rise, while until recently, Plymouth seemed to be on a plummeting course down. (I think it isn’t anymore; the school is in a frenzy of hiring very talented people these days. And even management is changing; would that be the end of the days that a permanent contract was a license to idle and bully?) And I was afraid to be pressured to collaborate with Roland’s protégé after Roland would have gone. And I had lived in Plymouth for four years; as it never really felt like home, this might be a good opportunity if another place could be more homely. 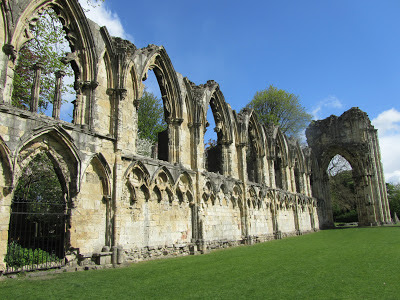 Some of the ubiquitous beauty with which York greets visitors

What made me feel a bit better about it all was starting to look for apartments on Internet. It gave me a bit of a child-in-the-candy-shop feeling. This one has a garden! This one has a view on the Minster! This one looks out over the Ouse! This one has two bedrooms! This one is really close to the railway station and the railway museum! So thinking of all these desirable things I could have cheered me up. Things got a bit awkward when I had to make appointments with letting agencies from my sickbed, but when I boarded the train to get to York I was already feeling a whole lot better. And I knew I would have a great time: project member Antony had chivalrously offered his hospitality (he is that kind of guy), and I had gratefully accepted. So even though the uncertainty of the situation is still looming dark in the background, this was the time when the good things about moving north were starting to shine through. Let’s hope things will keep on getting better!

Being closer to an airport that allows you to fly to Oslo easily sounds good, in my humble opinion! In other words - hope to see you in Oslo some time :-) Lykke til med hele flyttingen!
-Helgard

Yay! I'll make sure to pop around! I look forward to it already ! And tusen takk!