I don't even live there, and I've been to a Yorkshire parish council meeting. I'm going in headfirst! So what is going on? As I mentioned before, when I went looking for a place to live in York, I stayed with Antony, and Antony is on a Mission. North Yorkshire County Council has received planning permission for an enormous waste incinerator near Knaresborough; a village some 10 km away. Antony, who is involved in local politics as he's the head of his parish council, and some of his fellow councilors think that permission has been granted too lightly. They argue the incinerator is about 1.5 times too big for the amount of waste Yorkshire produces, it is therefore also way too expensive, and it would be anyway because recycling is much cheaper as reuse saves money. They also think it's a logistically bad idea to bring ALL the waste of Yorkshire (including York) to one place, instead of the more localized waste disposal that happens now. Furthermore, the planned incinerator had no facilities for combined heat and power (CHP) generation, which is unnecessarily wasteful as well. And several of these considerations had not been properly considered by the planning committee. And Antony and his fellow knights are convinced that permission would not have been granted if the committee had been presented with the full story, and they are trying to have the permission overturned.

Antony really cares about this. During the fieldwork in Peterborough he was working very hard on a speech he would deliver to the planning committee, and even did a try-out with us as the audience. During the Sussex fieldwork he would regularly retreat with his laptop to skype his brothers in arms before breakfast. So I was already quite aware of this issue, and I wasn't surprised to hear that during my stay, he and two of his fellows would speech to the neighbouring parish council.

Appealing against this incinerator isn't free. To be more precise; legal cost is probably going to be ~£70.000. Not something a small village like Antony's can afford! But other villages would suffer too; the closer villages even more, through all the garbage lorries thundering down the roads. And the whole county would suffer through heavily increased council tax to pay for the whole thing, combined with budget cuts on other services, such as health care and education. Nearby villages would also suffer through devaluation of houses if the countryside would get dominated by this monstrously large installation, and villages that contain the current waste facilities would suffer job losses. So many parishes were chipping in. The neighbouring village had not been among them! But if it was up to Antony  that would change. And he dragged me along.

I erroneously assumed we would stay for the entire meeting, so I had brought a Dostoyevsky for in case it got a bit too boring. But as long as the incinerator was the topic, I was interested. They explained the issues in such a way you would want to jerk out your wallet and throw it to them, shouting "take it all!" The local parishioners were not that rambunctious, but it looked like they were won over anyway. And logically so; the plan indeed sounded suspiciously like a "vanity project". These are not the economic times to build unnecessarily expensive facilities, and not the climatic times to build energy-inefficient ones. And when that message had sunk in, and the parish council got ready to discuss the next topic, Antony already gestured at me: time to go! So that was all! Fyodor stayed untouched. Antony then spent the rest of the evening in a meeting with the two mates. And I started a blogpost. I've been won over to the cause too! So I'm still typing this in the balmy south, but I'm already involved in York politics... Say NO to the new Yorkshire incinerator! 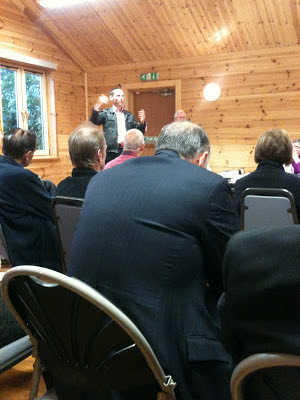 ps read all about it on the parish council website. And there is an action group too!