Spring in the Netherlands

Should I go back to the Netherlands for the inauguration of the king? I don’t like crowds. So no. But I wanted to come back in spring. What occasion to pick? And then the Dovrefjell bunch decided to get back together in the weekend that contains Remembrance Day and the liberation festivities. So that became my excuse to book flights!

I started in Amsterdam. Roelof had taken the afternoon off! Monique joined us too. It was a lovely sunny day, so we decided to have a beer on the roof of the old Volkskrant building. It now had a pub/restaurant on the top floor. And that turned out to be a very good choice! We caught up. And discussed that we’ll have known each other for 20 years coming August. We should not let that pass unnoticed! 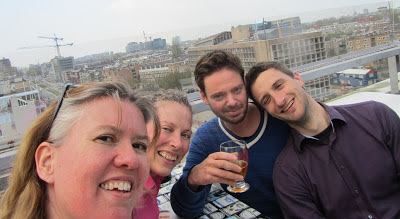 On the roof of the old Volkskrant building: Monique, me, Micha (looking sultry!) and Roelof

Later Marijn, Henco and Maaike also joined. I’ve only known these for some 19 years! Parvenus :). I hope the latter two will join the winterhike again the coming year (they had skipped this year)!

I knew I would not see my mother very much if I would stay the night, so even though I’m always welcome to stay, I caught the last train together with Henco and Maaike to Amersfoort. It was 2AM by the time I got there, but at least I would wake up in my mother’s house. And once on our way I realised I didn’t have my camera with me. D’oh! I probably had left it in the pub. How many times have I had to go back to a pub to get this thing? It’s a miracle I’ve had it for this long.
The next day I just caught up with my mother, until it was time to go to the Hague for the Norway reunion. I walked through this city which is more familiar to me through television (it’s the seat of parliament!) than from real life. I found a street stall selling herring next to the Binnenhof; I didn’t let that opportunity slip. I was keen on making sure I would get my share of Dutch delicacies as herring, cheese and bitterballen while I was in the country! 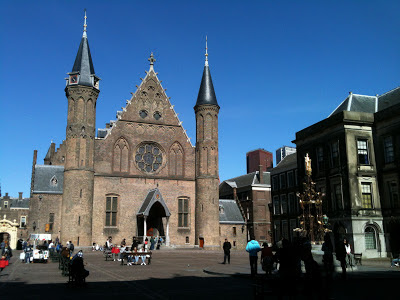 On my way to a rendez-vous with the Dovrefjell lot I passed the Binnenhof; the seat of Dutch political power 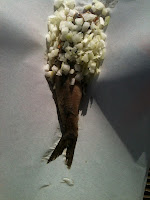 I ate a herring there!

Meeting most of the hike crew was nice. Four couldn’t make it, but eight isn’t a bad score. One chap came in with a pair of skis over his shoulder. He was ready for next year’s trip! We all admired his new purchase.

Later in the evening we watched an obscure movie in which people were at risk of dying of hypothermia. We figured that was fitting! But after part I I was too tired to see part II. It’s in my bag now… it was bedtime.

The next day we had a lie-in, enjoyed breakfast in the sun, and then we were off. Felix brought me to Leiden, where I bought a Public Transport chip-card. After I left the Netherlands, these had been introduced. I had never gotten round to getting one. The ticket machine offered me the option, and I jumped to it. I immediately felt much more integrated in society! And the system seemed to work rather well, too.

From Leiden I went back to Roelof. I sure had left my camera in the pub! They had found it, though, and he had retrieved it. The initial plan had been to go to my mum before visiting my sister, but now I had to make the detour through Amsterdam. I planned that really badly. I didn’t stay long; I wanted to go see my mum! But once I was in the train to Amersfoort I realised that only if I was really fast, I would manage to run to her place, give her a kiss, and then run back to take the train to Hilversum, where my sister lives. So that wasn’t a feasible option. I could have stayed at Roelof’s for another hour! I had that nasty feeling in my gut, that you get when you know you’re wasted crucial time, and it was gone forever. But the only thing you can do with that is learn from it and try not to think too much about it otherwise. 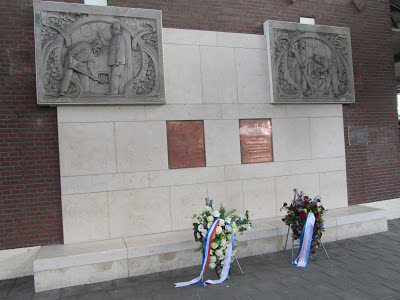 It was Remembrance Day weekend. That showed even on the platforms of Amersfoort railway station.

I read a book for half an hour on Amersfoort station, and then I went to Hilversum after all. There I found my tired sister and her family; they had had a family weekend (my sister’s husband’s family), and were worn out by lack of sleep and frolicking on the beach.

I had made things worse by not only turning up, but also inviting my father and stepmother along. More family! My father and his wife had only just come back from holiday in the Eiffel. They didn’t look tired at all. They were just tan!

My nephew showed me the guinea pigs. My other nephew introduced me to the infamous King's song. My niece played harmonica for me, and gave me a drawing of a flying horse pulling a coach. My dad wondered if my next job would be on Samoa. And the sun was still shining. It was very nice indeed!

My dad and stepmother gave me a ride to the railway station. I went back to my mother. I would still have a bit of the evening with her, and then the next morning! I borrowed her bike to go buy some cheese: very Dutch. And then it was time to get English again! 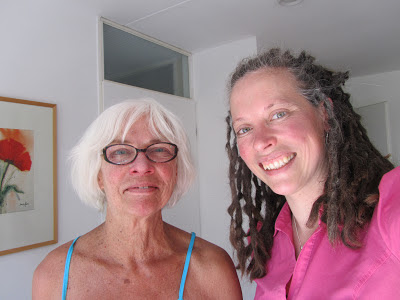 Me and my mum!

I stayed in Dutch atmospheres a little longer than I had anticipated: when I was boarding the plane, I saw a Dutch roboticist I know. He works at Plymouth University too. He had come to the airport by public transport. But I was by car! So I gave him a ride back to Plymouth. Another hour of speaking Dutch! But all things must end, even being Dutch in the head. Time to get English again. I have to get ready to move North! But I will be back: next month there’s a wedding in Amsterdam I’m invited to! Stay tuned!
Posted by Margot at 09:00