The list of goodbyes continues! I had picked the 24th as the day of my official goodbye, even though I plan to not evacuate my office until the 29th. You don't want to have a goodbye do in the middle of the week when everybody has to get up early the next morning, and you certainly don't want to do it while you are stressed about last things that need done before the removalists come. So Friday 4PM it was! The school provided tea, coffee and biscuits. I was starting to feel strange. I had already felt strange for a while; I had looked at Google Maps what my journey would be, and it started to sink in that when I would embark on that trip, that would be it! Then I would no longer be a southwesterner.

The goodbye do was strange too. All these nice people coming for me! And me leaving them! I was glad and sad at the same time. I am a bit emotional I'm afraid. Many colleagues showed up, and I was glad to see that Malcolm of Geology and Patric of Psychology also showed up. Thanks, gentlemen!

Rob came to me and gave me beautiful words and a lovely present. I'll miss him! Be well, Rob! And then there was the sound of a spoon against glass. Or rather, a cup and saucer banged together. Pete took the floor. And he gave a heart-warming speech. He figured that come people should take over my School tasks. These turned out to be: make sounds during seminars, ask the first question after seminars, and have dreadlocks. He already nominated someone for the last job: deputy head of school Ruth. I trust someone will be willing to see to the other two! And he handed me presents and a card. And it was my own goodbye, so I didn't do the paparazzo thing. No pictures of this event!

I speeched back, forgetting half of what I intended to say. As one does. I recounted how I arrived; alone, sad, received by a grim railway station and an unpleasant apartment. And how, almost 4 years later, I was surrounded by friends, having found a new passion underground, and even one above ground, and a much more experienced academic than I was then. Your surroundings shape you so much, and the southwest turned me into a sea level scientist, a university teacher, a runner, and a seasoned caver/mine explorer. Quite something!

And then it was pub time. We only went there with three people, but a fourth was already awaiting us at the pub, and eight more showed up later. It was very nice! And then we got hungry. A meal followed, and then, under normal circumstances, it would have been bedtime. But this was my goodbye. I had Jon take the lead and drag the remaining men (and me) standing to two more pubs. And then we called it a day. I kissed every single one of them (one is allowed that at one's goodbye do) and then we all went home. When I biked along the moonlit waterfront I got a bit sentimental- again. I might not see this again! Goodbye, School of Geography, Earth and Environmental Sciences at Plymouth University! I have the card with all the personal goodbyes on it, and I'll treasure it. And I hope to sometimes visit! 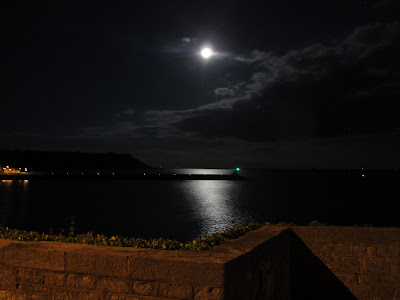