I wanted to have these knowledgeable people look at my specimens; they would be the people to give me a massive leg-up in getting familiar with them. When I mailed them they declared themselves willing. Yay! That will make things much easier. It’s not easy to sort it out yourself; there are so, so many species you can’t just leaf through a catalogue until you find something that looks like what you see through your microscope. One of our retired professors in geology does have a catalogue; it fills a book cupboard. And we don’t have a big reference collection. It really helps if people point your nose in the right direction.

So in order to get ready for this workshop I put many, many forams in microslides. They will come with me! And if that would not be enough microfossil friends; the organiser also asked me to bring specimens of a specific species he was doing research on. We happen to have lots of these in our collection! I hope all goes well. 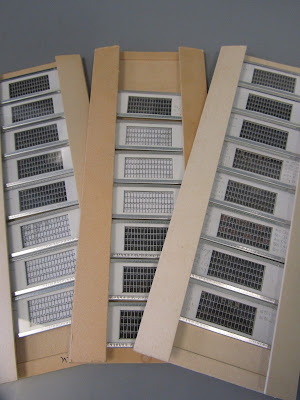 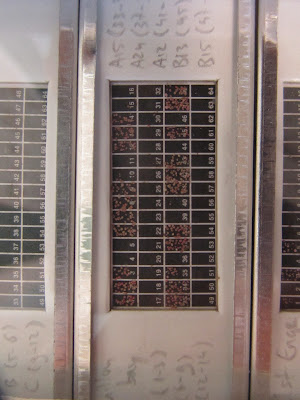 Blogger insists on having this picture in portrait format! Beats me why...

So with my thousands of little dead friends I will go back to beautiful St Andrews. I look forward to it, but I’m also a bit apprehensive; the grandfather of UK benthic foram research is there… his writing style suggests he doesn’t suffer microfossil fools. And I might qualify as one. We’ll see! I feel honoured to be able to find out. I hope I return with my head filled to the brim with foram knowledge, learned from the best. I will report back!