The Plymouth Half Marathon was my first race! And a year has passed. So for the first time I had the chance to re-run a race. I intended to this year do it faster and more British.

How does one race British? Running for charity, of course! I had observed before that in general the Brits don’t stand out in sportiness, but when there’s a good cause to be supported they run and swim and hop backwards on one leg while dressed up as the Tower Bridge like there’s no tomorrow. That fact had already helped inspire me to start running in the first place, about two years ago, and now it was time to join these ranks. So I ran for Cancer Research UK. I was incognito; you could ask for a shirt so everybody would recognise you would be running for them, but I didn’t.

I so far have raised £40; thanks Monique, Phil, Viking, Jon and Hugh! But there is no rule one can’t be sponsored a posteriori. Half of the amount raised so far came in after the event, and the site won't close anywhere soon. So I’ve made my little contribution to cancer research.

The other difference was speed; the previous time, I paced myself, as I was afraid of hitting the wall. This time I wasn’t. So I set off at a healthy pace. So healthy even Hugh thought it might have been a bit fast, really. He ran the same pace until about a quarter of the way! That has never happened before. 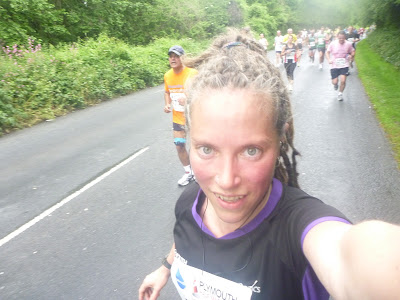 I noticed starting fast takes its toll; I didn’t hit any walls, but I did notice a solid fatigue in my legs, already halfway into the race, and that hadn’t been there the year before. But what’s fatigue? Something to ignore. So I just ploughed on. And when I saw the “11 miles” sign I even started doing the maths; at what time could I come in? I hoped I would make it within 1:50. The previous time I had done 1:53:26, so if I would make that it would be quite an improvement. The last miles, though, were much harder than the first time, and I didn’t make it under 1:50. But almost: my time was 1:50:00! How precise of me. 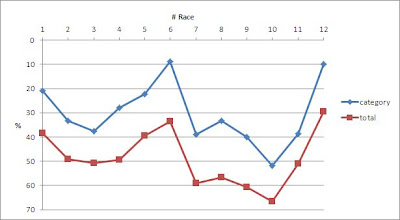 As expected: my results in this race were much better than average! These road races are done by a less tough field than the off-road races. Still good for one's ego, though... In blue, by the way, my results in my category, which here was 35-40 old females. I outran 90% of them! And I even outran 70% of the whole field (in red)... not bad!

I don’t know if I’ll do it again next year, but if I do I’ll try to find the golden average. Start a bit slower and finish a bit faster than this year. One learns!

And even more than last year, it wasn’t much of a social occasion. There were four more geographers running, and our new student was there, and Neil, and Pacer Woman. At the start I found Hugh and Pete, but no trace of the other familiar faces. Hugh stayed with me for miles, but Pete vanished immediately after the start. He would later turn out to have run in only 1:39:50. Very fast! During the race I did see two Plymouth University employees, one of which I see often at races. And at one of the places where the race turns back on itself, and one thus can see runners either some distance ahead or behind, I suddenly heard my name. It was Neil! To my astonishment he was behind me. He would finish 2 minutes after me; unbelievable! But that were all familiar faces I saw, both in the race and among the spectators. And the finish was chaos; I had already given up finding even Hugh when I suddenly saw him standing there in the rain. No chance finding others! 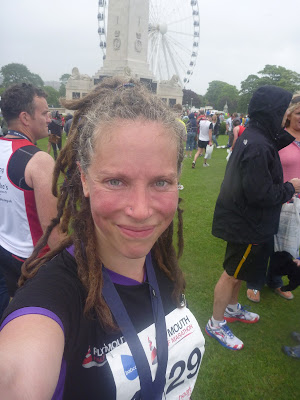 At the finish, on my own, in the wind and the rain

So what now? Since the 2011 Plymouth Half I have done many races of all kinds. I found out I prefer off-road races. Preferably those with not too many participants! And my knees feel a little bit tender; this should have been the last time I ran that far on asphalt, using anything other than the forefoot gait. I might do it again next year, just to see if I can do it faster, but for now I might want to focus on training my new technique, and register for some nice races through endless mud!
Posted by Margot at 19:20