Last week we did a hit-and-run trip down a mine; this week we managed to do it again. This time our goal was Bedford United; an amazing mine where I met the Cornish bunch for the first time. Later I'd been back on a trip that started stressy and then turned very relaxed as I ended up as a surveying assistant. This time all would be different! In spite of this mine being very special it hadn't attracted much attention. We would be only five! And then Dave's shoulder was playing up, which left only four. Two of us, Lionel and me, had been on the faff-free trip a week ago; it would be fairly similar.

We got kit ready and went to the gate. The first thing that happens after the gate is a winze with a ladder over it. As we are very responsible people we only cross that when attached to a safety line; this line you have to first put in yourself. Which involves placing bolts in holes drilled for that purpose. But this time it seemed the holes had eroded too much; the bolts wouldn't bite. We might have to re-drill! 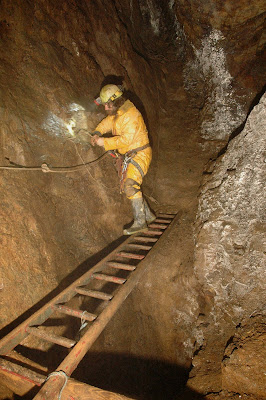 Rick on the ladder on the winze. He is actually taking the bolts back out, but what does it matter. Pic by John


We made it anyway, and got past the climb behind, the partial collapse, the clamber down, the crawl through a wet tunnel and then to the big drop down. The same issue with the bolt holes! So as smooth and efficient as we were ourselves; this required quite some faffing. One doesn't want to go down a proper winze on a rope that isn't decently fixed. 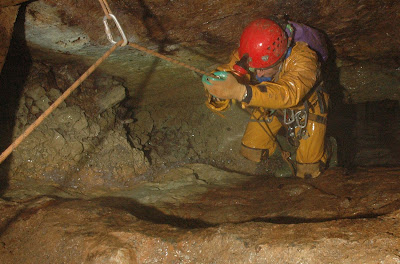 Lionel in the drop; as with the previous one, the pic is taken on the way out! Pic by John 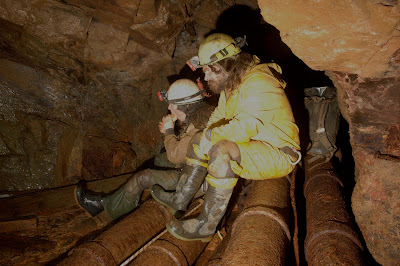 Lunch near the shaft. Pic by John

Once down we quickly went on beyond where I had been the last time; I had forgotten how much fun there is to be had there! Waist deep water, dodgy ladders of both the wooden and steel variety, waterfalls everywhere, a shaft full of chunky bits of mining mechanics, launders and rails, and one winze after the other that could be crossed by a variety of dodgy planks, rusty rails and what have you. Fun! Lots of it! 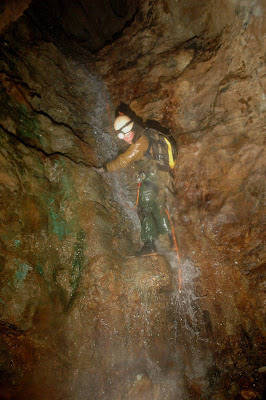 Me coming down the waterfall. Pic by John 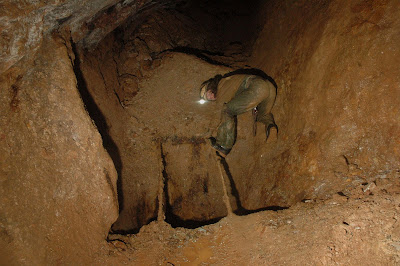 Me having crossed one of the winzes. Pic by John 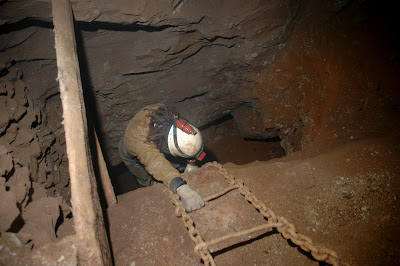 The chain ladder. Pic by John 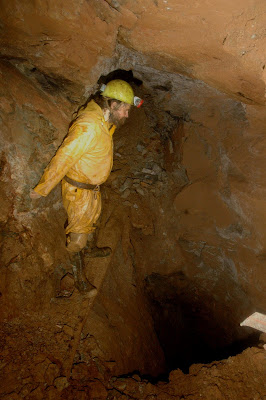 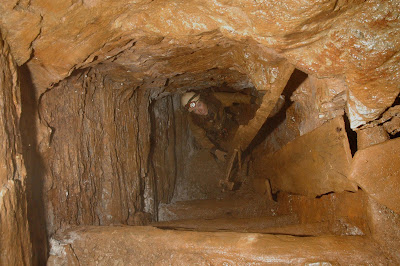 One of the wonkier ladders. Pic by John

We moved fast. Only four works well! And while we were at it we got John SRT-ing. He had only done an inclined shaft before, but he did well! But after a while we found one winze where the planks spanning it were exceptionally wonky-looking. We figured that was even pushing it for us. No need to get ourselves in trouble! So we wisely turned back and took all obstacles in the reverse direction. Halfway back, Rick suddenly disappeared into a hardly discernible hole. Of course behind it there was bad air, waist deep ochreous gloop, and amazing formations. None of us had seen that before! Quite a treat. And even after that we were out before dinner time. 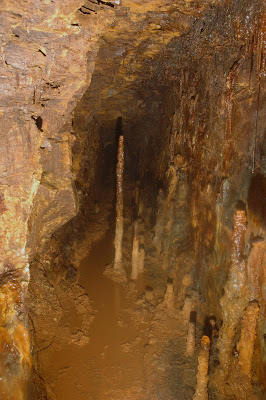 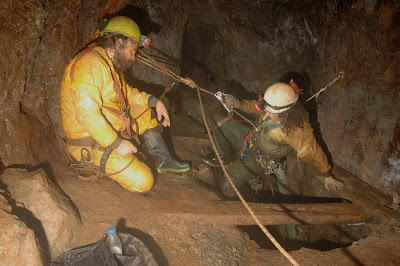 Me coming out of the drop. Pic by John

I decided to use the outside waterfall to get the ochre off of me. Then I took my thermals off. Then I went back to the waterfall. I was still orange! But after two showers I was ready for a small walk; we had a look at where our gloopy level would come out in the hillside. And then we went to the pub. I kind of like trips like that. Let's see if we can do it more often! 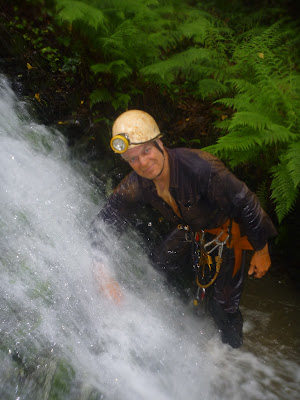 John also recognising the cleansing properties of the waterfall
Posted by Margot at 23:06