I was hoping for a bit of documentation. I got the experts in action.

I mentioned it before; when I started looking at the forams in the sediments we had retrieved from Norfolk I realised many were unfamiliar. And that, in trying to have someone who had worked on them before send me some PDFs with descriptions, I had managed to get invited to a taxonomy workshop.

I had been quite busy with the project meeting in Durham, so I didn’t have as much time as I wished for preparing for this workshop. But I did manage to bring a lot of specimens. And together with my dear friend and PhD student Rob I made my way to the other side of the country.

The workshop started with some utter gods in the world of foraminifera giving a talk. Karen Luise Knudsen! Elisabeth Alve! I had been looking forward to meeting them. I had briefly met Kare Luise on a conference, but I was sure she wouldn’t remember that. I had never met Elisabeth. And in the audience (he’d talk the next day): John Murray! I had been most apprehensive about him. He’s been in foram research for 55 years and knows practically everything that is known about the little critters. And from reading his articles I had gotten the impression he was somewhat impatient and did not suffer fools. And when it comes to foraminifera I am a fool. I have blundered into jobs in which I was supposed to be able to identify them and I had to learn on my feet. I never learned about forams in a structured way…

After the talks in the morning, and lunch in sunny St Andrews where it was graduation week (lots of people dressed in their finest, which includes kilts, with gowns!) we did some hands-on work. I’ll describe that on my science blog; I’ll include a link when I’ve posted that entry! (And here it is!) 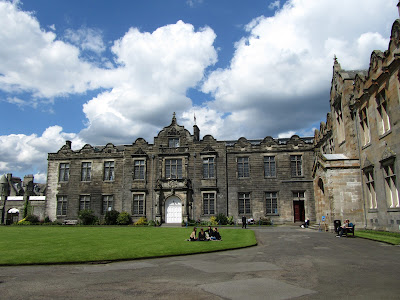 Lunch in the sun

When that was done it was time for beer, wine and then dinner, and then optionally more beer. That first day had taught me a lot about forams. It had also taught me that the world experts are absolutely lovely people. John Murray was as knowledgeable as I knew he would be. And he was not without criticism on contemporary foram research; when I asked him if he thought many people were still inventing the wheel in our field, he answered “I think quite many people have no idea what a wheel is…” But he was very inviting and approachable. A lovely man indeed!

I also got confirmation that the Dutch are a boisterous bunch: easily half the noise made at the 30 person workshop had been made by just two people. One from Yale and one from the University of Angers. But both Dutch. And not afraid to be heard!

The next day there were more talks, including one by John Murray himself, and then time to show each other our samples. I was very pleased to have Bill Austin and Karen Luise look at mine - they were of invaluable help. I’m ready now for doing some proper analysis of my samples! 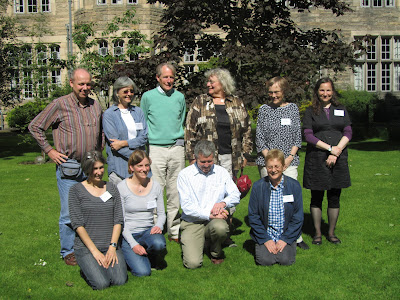 
The workshop ended with a group discussion on what we thought the outstanding issues were, and what way we should be heading, and such things. A great way of summing up the outcomes of a workshop! And then, our heads full of foraminiferal thoughts, Rob and I had to make our way to the airport and then home. I would dream of forams for nights to come! I was very privileged to have attended this workshop. It’s great to learn from the best. Especially if the best are also this nice!
Posted by Margot at 17:32