Back down the cliff

This is a story about how not to organise a caving trip. And a story on how to complete a caving trip. Our club sometimes is slightly disorganised; some time ago a club trip had to be cancelled because of people forgetting it was on, forgetting to advertise it, erroneously assuming nobody was interested, having lent out their kit, having their phoned turned off, and a few more things like that. It's quite typical. When a week before someone realised this Tuesday would be a bank holiday, the vague plan to do a day trip, instead of the more traditional evening trip. So a mail went out. And then things became ambiguous as ever. In the end, a trip was organised at 10PM the night before. Welcome to the PCG!

We would visit a site under an impressive cliff; there were only four of us, and only two of us had visited it before. Would we remember where and how to rig it? Would we find the way underground? But we met up absolutely punctually, found the spot without effort, and rigged it in minutes. Maybe we had muddled up the organisation, but the execution was impeccable! 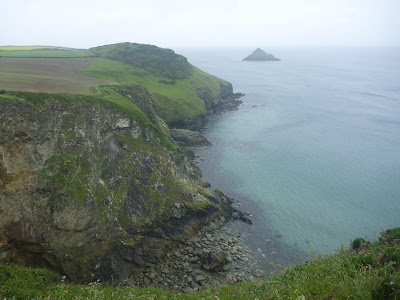 A somewhat gloomy day on the beautiful English coast

Lionel had concocted the plan and lured Finbar along; I quite like the mine, and for Hugh it was a great chance to try his shiny new SRT kit. It was a ~80m cliff we had to get down from! And back up, of course. 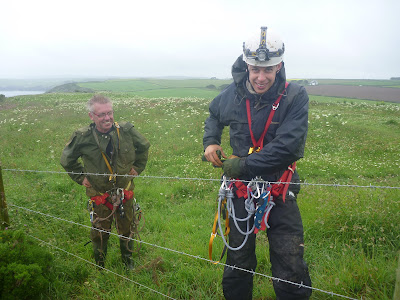 Hugh all kitted up, inspiring admiring glances from Finbar

We first went into the wrong entrance, as I erroneously thought I recognised it as the correct one. But dead ends in all directions soon educated us. The actual entrance was soon found afterwards. So we scurried in! With a bit of trial and error we found the wonky rusty ladder that is the start of the assault course that this mine is. Hardly any distance can be covered without a handline. And they're not always put in in the most user friendly way. I like the endless clambering and sliding, but Finbar was less impressed. Luckily he did pull all of it off.

We moved very fast; only four people, all reasonably fit, and none of them spending too much time on photography, can move really fast through a mine. So quite soon we found dead ends in two directions, the way back out in a third direction, and the water table in the remaining directions. We must have missed something; the previous time we covered more ground. That's what you get when you go without the proper experts! But we didn't mind too much. We spent some time ogling a tunnel leading on from a lake; we weren't in the mood for a swim, so we left exploring the possibilities there to a later date. And we went back; a nice post-mine beer is worth something too! 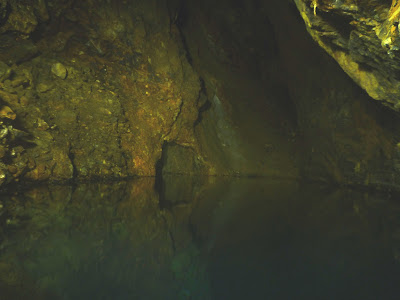 The lake plus tunnel in question; the only place where I took pictures

Before we got to the pub we first had to get back up the cliff. The circumstances were suboptimal; in the rain, the rock was very slippery. But we all got up; quite fast altogether! Lionel only needed 9 minutes to get up the cliff. And that was good; it wasn't the kind of weather to endlessly lie in the grass and look at people making their way up. And the de-rigging was peanuts too. 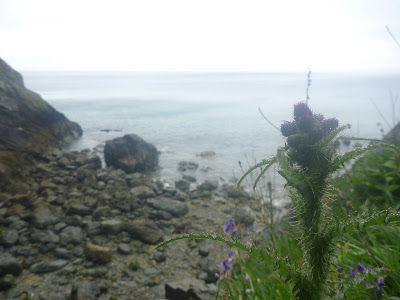 I had some time to make arty-farty pictures 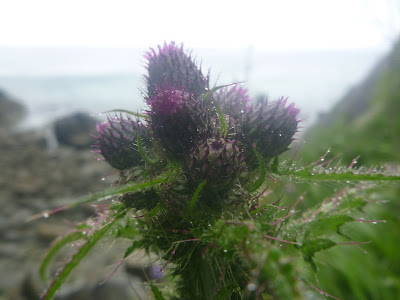 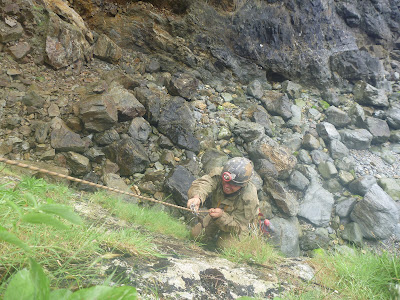 Finbar coming up the first pitch, with Lionel (the red-and-blue thingy) below him

We changed, phoned Dave to inform him we were out safe, and drove the scenic route to Blisland. It had a pub Lionel greatly approved of. And his approval is not lightly given! So we indeed found a lovely variety of real ales in a cozy room. A nice, leasurely end to an improvised, yet succesful caving trip!