They both said I do! So that was the most important part of the day.

I was very honoured to be invited to the wedding of two young colleagues: Paul and Louise. My involvement in the whole thing started out a bit confusing. I got invited to Louise's hen do, but I was in Durham at the time, so I had to skip that. Paul's situation can be described as that he initially might or might not have a stag do. After all sorts of changes he in the end would just have a pint with a few mates. And I was one! So I started out as one of the lads. On the very night the topics of conversation did reflect a male domination; I shall not venture into details. But all would be restored at the wedding itself!

Hugh and I got ready in Salcombe, and drove to Exeter, where we had booked a B&B. From there we walked to the venue. The true test of my new pair of heels! Luckily, the weather was lovely; quite a contrast with the entire rest of the month. This was the time of flooding and gales. But not today. The beautiful hall was baking in sunlight, and clusters of well-dressed people were already festooning the entrance. And if I may say so; we added to it! Hugh looks spiffing in a suit and I was quite satisfied with my femininity-restoring pink dress with black heels. 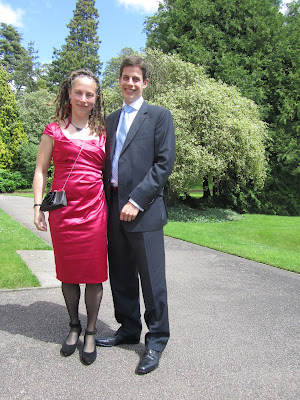 Hugh and me as wedding guests

We got in, got ourselves a seat, and waited for the bride to come in. In the meantime we could admire the Scottish regalia of the groom's family. It was good they wore splendid kilts, as the bride just wouldn't show up. In the end one of the best men stepped forward and announced that the official who was supposed to conduct the marriage had for some reason been prevented from making an appearance, and that a replacement was on the way. Luckily, that replacement arrived soon. And then all could go as planned after all!

Lou was paraded in by her dad; she looked as beautiful as I had expected. A good match with impressively kilted Paul! When the ceremony was underway I had one moment of cultural dissonance: the official described marriage as a union of a man and a woman. Twice! What century is this? Questionable Brits. But aside from that all went swimmingly. 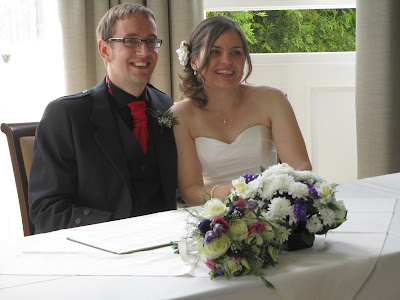 After the ceremony it was time for drinks, socialising and pictures. And then dinner, including speeches. And then more socialising and drinks. And listening to tall stories from the kilted older generation! And then there was what was a second highlight of the evening: a ceilidh! I had never done one before. In his groomal speech (or whatever it's called) Paul had already announced dancing isn't optional. So even if I hadn't looked forward to it I had to deliver. On 6 cm heels! 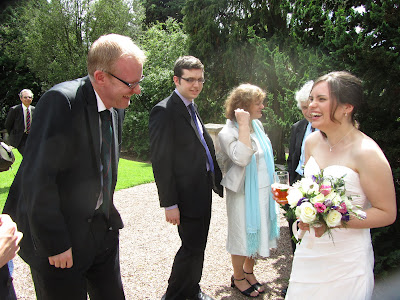 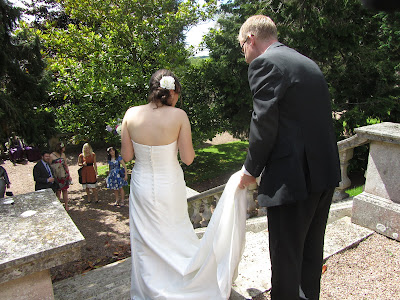 Lou on her way down the stairs, train and all; notice the two bridesmaids (in purple) enjoying some leisure time on a bench in the extreme left of the picture while Jon does the work!

When the musicians were warming up the small children of a colleague had the dancefloor to themselves. They had a blast! But then the first dance was announced by the caller, and their mother quickly whisked them away. A bit sad, that! But this was the bridal pair's night. They romantically opened the dance. And then I could start my first ceilidh. It involves a lot of circling around in pairs and foursomes, then recombining in other pairs or foursomes, and then doing it all again. The steps are dead easy and with all that changing you get to dance with everybody. I had a blast! Hugh, who had initially been somewhat miffed when he found out this dancefloor was not for freewheeling, took to it too. And I managed on my heels like nothing on earth! I didn't stagger or roll (or fall flat on my face, or break my ankle) even once. I was quite proud of myself! These heels have passed the test. It may have something to do with the anti-slip sole and the stabilising high strap! And they did hurt, quite badly actually, but standing still hurt way more than dancing. so I was on the floor a lot. Great fun!

Later in the evening the dancing got somewhat sillier. There was one dance for trios: one man with two ladies. But that way one gets short of ladies. So one trio solved that by having one lady and two men. Why not! But with the continuous recombining that meant that sometimes we had three lads dancing together, holding hands. Which nobody seemed to mind. That made up a bit for the earlier intolerance!

After I had danced with practically everybody; all present colleagues, and all the other guests too, and after I had really used up my feet, the evening came to a close. So we kissed bride and groom goodbye, and staggered into the darkness. That is; Hugh strode away energetically, but I had to call him back; I can't keep up with his long-legged gait at the best of times, but after 12 hours on heels I can't even do half his normal speed. So it was a slow, and very painful, walk home. Next time I bring a pair of back-up shoes, no matter what Hugh says about a bag (bigger than one that can only hold a credit card and a lipstick) being a fashion faux-pas with outfits like ours. I've now done the whole thing once; no need to do it again!

Even though I was a bit cold in my damp (sweaty!) dress and whimpering with pain I was quite happy: this had been a very good wedding! I do hope that bride and groom feel the same way, or rather, are even much more enthusiastic! May they have a long and happy married life!
Posted by Margot at 09:25