I had been there before, but that was back in the days I had no frame of reference. I struggled to send out the email with information. And then Dave phoned me to say he was ill, and wouldn’t be coming. I didn’t even know where the entrance was!

I phoned Lionel and he was willing to take over. He knew where it was and had some vague notion concerning how to rig it. And then I got an email from Rick: he would come too, and he knew the place well. What I appreciated less was mails and phone calls from non-members who wanted to come along. Always nice to welcome new faces, but it would be nice if they would give a bit longer notice, especially if they need a lift.

I survived a hectic working day, filled up my entire boot with kit at Dave’s, and drove to the not-so-well-defined meeting place. And immediately afterwards two more cars appeared. Then some racket announced Rick. And then unimaginable racket announced Bob, the mad archaeologist, who nowadays lives far away and rarely honours us with his presence. Things were going well! While I was sending text messages to newbie latecomers the men started sorting out kit. And soon we were ready to go. I figured the newbies might have changed their minds, and send them a message to say we’d left. And down we went.

I dragged Bob’s epic WWI military tripod through the woods to the impressive entrance. While Lionel was rigging the first obstacle the newbies appeared after all. There was some faffing and scurrying; some members had just shown up to see if they felt up for it, and only the first obstacle convinced some they weren’t. Exit newbies, ill-omened Bernard, and Marina. And on we went with the rest! 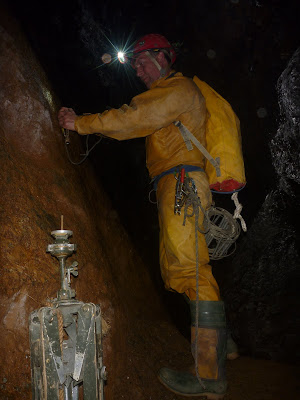 Lionel rigging with the epic tripod in the foreground 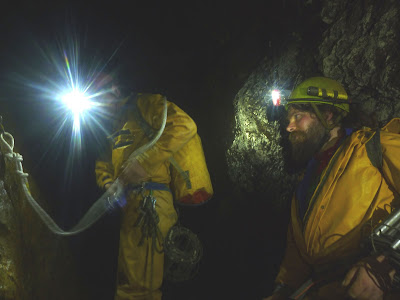 Rigging the most serious drop proved a bit of a challenge; one bolt hole had been worn out, but our intrepid explorers were not taken aback, and soon Lionel was standing in the level below. Soon afterwards Bob’s kit went rattling down, and shortly afterwards we were surveying the bottom of the wheel chamber. That had been Bob’s reason to show up, and I had eagerly volunteered to be his assistant. The man oozes mining archaeology knowledge. 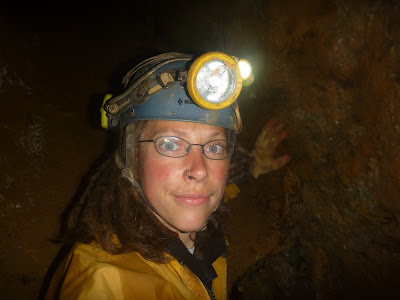 I was evidently only half awake. Forgotten to take my glasses off again!

The others went for a stroll in the further reaches of the mine, and were already back before we were done. We would be the last ones up. And it was getting late, so Lionel was already throwing things down on us in impatience while Bob was still taking pictures of interesting features. I would come up last; Bob is too busy being knowledgeable to be able to look after himself, so I had to do that for him. 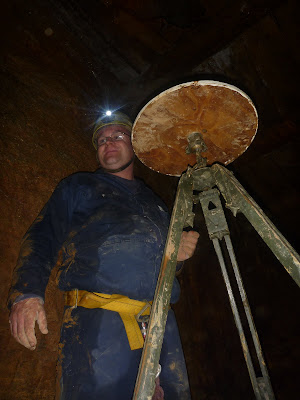 Bob with his surveying paraphernalia 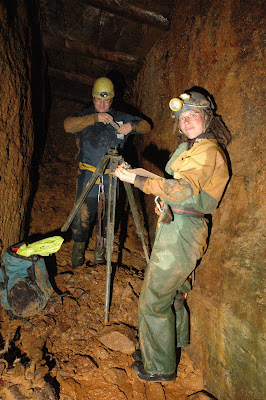 And me taking notes. 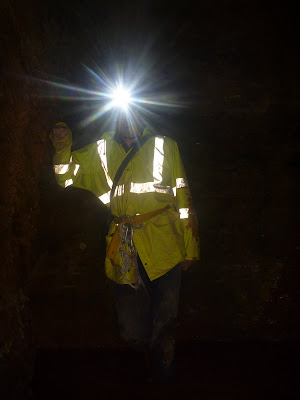 John being blinding as always
Coming out with all the de-rigging and dragging all the kit out takes a while as well, but we did come out. Around 23.30 we reached the cars again! Too late for the pub. I collected all kit again, figured changing would be unnecessary, and drove home. I hadn’t had time for food, so I ate something, had a shower, and dropped into my bed, quite happy with dealing with all the kit the day after. All the ropes and ladders had to be cleaned, and all club kit separated from my and Dave’s personal stuff. And the helmets needed some maintenance. And first I had to go give an important presentation. I would have to do that caffeine-fuelled. Ah well. Never a dull moment this way! 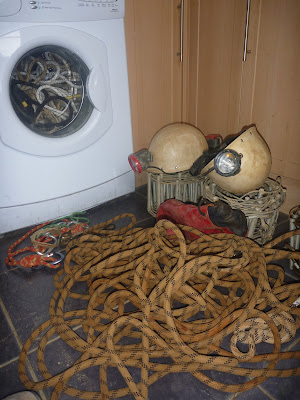