Rocking in the free world

So much to do, so little time! But for some things one should make time. I happen to be a member of the Trevithick society (for the preservation and study of Cornwall's industrial heritage), and they had organised a walk around the surface remains of Devon Great Consols (yes they strayed into the next county... don’t tell anyone). And the guide was nobody other that our own Rick. That I didn’t want to miss!

The night before there would be live music in Roland and Bill’s default pub. I wasn’t too inclined to join; there’s so much to do! But later Neil reminded me of the fact that DGC is quite close to pub and Roland, so I might as well! I would just stay over at Roland’s, which is always a pleasure as he and his are exemplarily hospitable.

On the day itself I got another text message from Roland; if I could help him with putting something big in the loft before going to the pub. And kind as I am I did. So this Trevithick meeting was casting its shadow further and further forward!

I handle lofts like no other so the matter was quickly resolved. Pub time! There would first be a BBQ, which I used for doing some very postponed relaxing. And then the band started. Good old rock classics! Not much later Roland and I were showing our unimaginably elegant dance moves to “Rocking in the free world”. A wild night out! It ended with me nagging at him I wanted to go home as I was tired, which works quite well if the person you nag at is your boss and benefits from you showing up fresh in the new working week, so before midnight we walked back through the balmy Cornish night. And soon I was lying in their comfortable guest bed, recharging for Rick and Richard Trevithick! I never guessed becoming a member of that club would lead to such unrestrained debauchery... 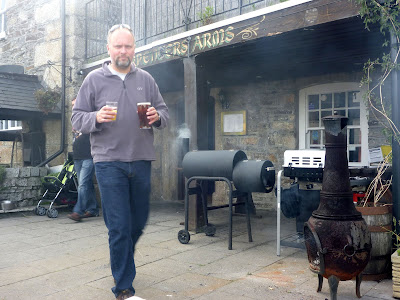 A good sight: Roland bringing me a beer! While the barbecues are warming up. 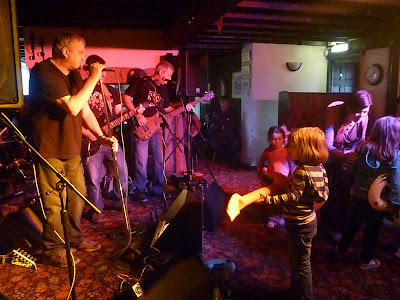 Cute village gig: old rockers in an even older pub, but with inflatable guitars for the village kids! Later the floor was reclaimed by irresponsible adults...
Posted by Margot at 18:21